Hello crafty friends! Today's card was inspired by my new-to-me Merry Whatever stamp set from Kindred Stamps, which had to be paired with Ink Road Stamps' Subway Art: Grinchmas stamp set. When I saw the Color Hues challenge #53 of Scarlet and Green, I knew that this was the challenge these sets were made for. I also wanted to play along with Christmas Craft Creations' November Washi Tape challenge to add some fun washi tape-ness in there as well. 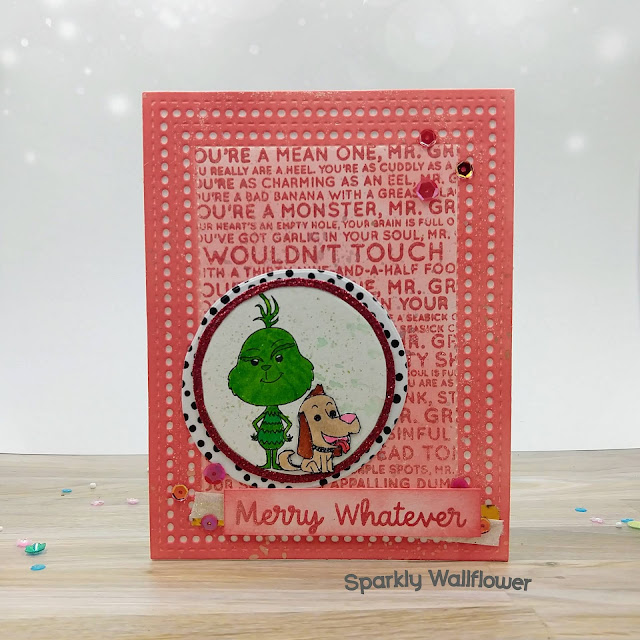 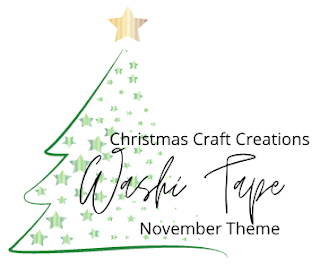 This card started with a piece of watercolor paper that was die cut with a decorative edge A2-sized die in my stash. I used some post-it notes to mask off the edges so that when I stamped my Ink Road Stamps' Subway Art: Grinchmas stamp set with Candied Apple Distress Oxide, it stamped the inside of the die cut paper and left the frame untouched. I then heat embossed the stamped words with Ranger's Holographic embossing powder. I then reversed the masking and ink blended around the frame of the die cut with more Candied Apple Distress Oxide. My original plan was to leave it like this, but decided that the stark white of the watercolor paper was a little too stark on the red and white background, so reversed the masking again, and lightly ink blended the interior part of the card with more of the Candied Apple Distress Oxide. I then splattered the die cut panel very liberally with light gold and white gold watercolor from the Gansai Tambi's Starry Colors watercolor set. I then set the background panel aside. 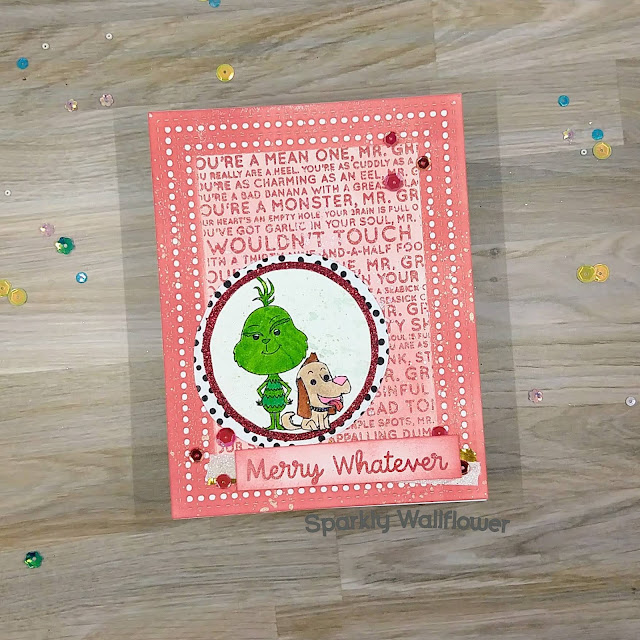 I then turned to the Grinch and his dog from Kindred Stamps' Merry Whatever stamp set. I stamped both on watercolor paper with Nocturne VersaFine Clair ink and then heat embossed them both with Ranger's Holographic embossing powder. I ended up fussy cutting the dog for some dimension, but die cut out the Grinch with one of the smaller Misshapen Stitched Circle dies from Picket Fence Studios. I then colored in both images with a variety of Zig Clean Color Real Brush Markers. I know that I cheated outside of the scarlet and green color scheme, but I thought the dog would look weird with a different color scheme, and hope that it was okay because I kept him in neutral brown colors as well as scarlet. I splattered the background watercolor paper surrounding the Grinch with very diluted green Zig Clean Color Real Brush Marker mixed with water as well as more gold watercolor for a little interest before gluing the dog on his right. I then returned to the Misshapen Stitched Circle die set--I used the same die that was used to cut out the Grinch to create a frame out of red glitter washi tape over some scrap cardstock and then used some tape to connect the frame and interior circle together. I repeated the process of die cutting a piece of scrap cardstock covered with Altenew's Many Dots washi tape, using the interior circle to create a second layer behind the stamped image. I then glued both layers to the bottom left third of the card panel as you see.

Finally, I turned to the sentiment, which also came from Kindred Stamps' Merry Whatever stamp set. I stamped these on a scrap of white cardstock with more Candied Apple Distress Oxide and then heat embossed again with more of the Holographic embossing powder and then trimmed it with my paper trimmer. I ink blended the strip with more of the Candied Apple Distress Oxide and then glued a couple layers of scrap cardstock behind the sentiment strip for dimension.

To assemble the card, I added a couple pieces of washi tape behind where the sentiment would go, making sure that the strips were longer than the sentiment so we could see them peeking out from behind the sentiment--a thin gold strip and a thin white glitter strip. I had them crisscross each other so the gold started on the bottom left and went to the top right and the white glitter strip did the opposite. I then glued the sentiment over the washi tape strips. I added some red and iridescent/coppery red sequins from a Simon Says Stamp sequin mix onto the card panel and then glued the whole thing onto an A2-sized white card base.

Thanks for reading! Have a crafty day.