Hello friends! The sketch for Atlantic Hearts Sketch Challenge #501 screamed holiday wreath, so I leaned into it since it is prime holiday card season. 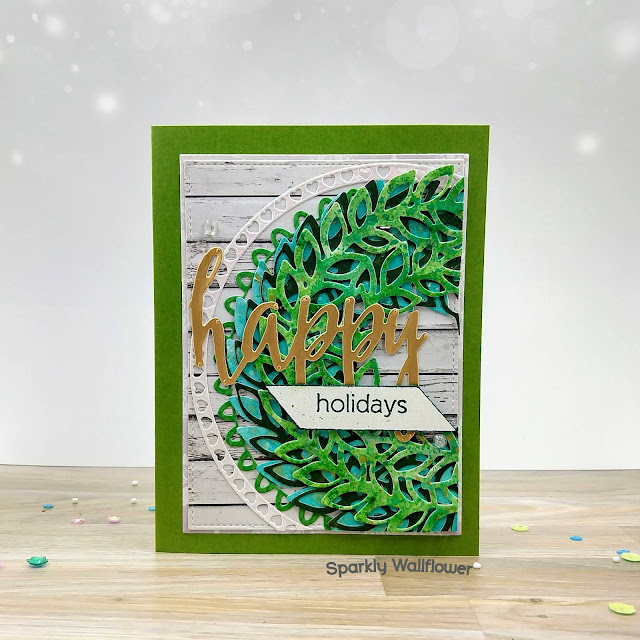 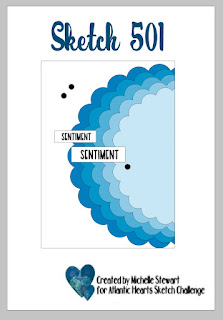 The focus of this card was the circular elements, so I decided to start with the wreath. I used two pieces of watercolor paper and colored them with a few of Altenew's Woodless Watercolor Pencils. The eventual top layer of the wreath was colored with a variety of green watercolor pencils, and then watercolored with water. While the paper was still wet, I splattered some blue watercolor pencil mixed with water as well as gold watercolor from my Gansai Tambi Gem Colors watercolor set. I also colored another piece of watercolor paper with my Catherine Pooler's Uptown ink mixed with water, again splattering gold watercolor over the paper while still wet. After everything had dried, I took the wreath stencil and die cut the green watercolored paper I had just made and a dark green piece of patterned paper and die cut both of them with the complete wreath die set from Concord & 9th's Holly Jolly 2021 event. (The die set is cleverly designed in pieces, so for the top two layers of wreath I used all three layers of the die-a center piece to cut a hole in the center of the wreath, an outline die to cut out the edges of the wreath, and a center die to cut out the leaves of the wreath.) I then used only the outline die and center/hole die of the wreath die set to cut out the blue watercolored paper to create a solid die so we can see more of the blue peeking through the leaves of the upper layers of the die cut wreath. While gluing the layers of the wreath together, I made sure that all three layers were not stacked up, meaning that the same leaf on each layer of the die cuts were not lined up. I also made sure that each layer was shifted a little to the right of the one below it to mimic the sketch but also so we could see all of the layers. I decided that while the sketch called for 5 layers right on top of each other, that this card would be better served with something different for the two outside rings. So I turned to Scrapbook.com's Nested Fancy Circle Borders Decorative Die Set to cut out two additional circle borders using two of the larger dies in the set--the smaller ring around the wreath out of green patterned paper, and the larger heart frame die cut out of Tessler Crafts' NACRE Circle paper. 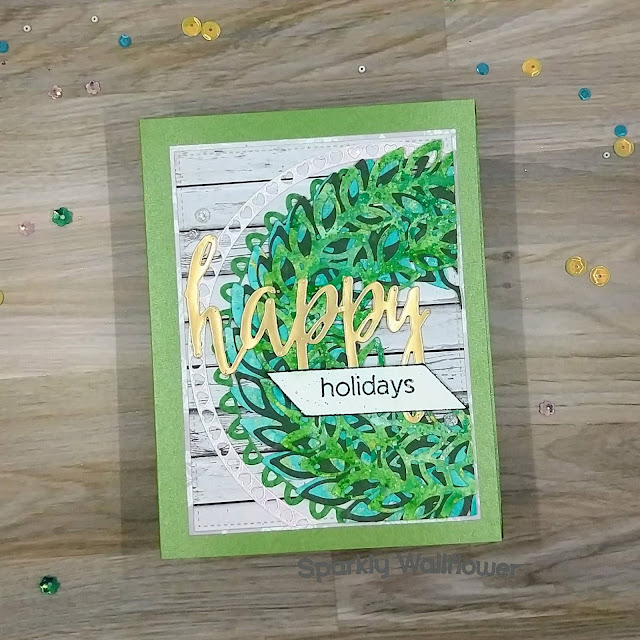 Next came the sentiment. I stamped the word holiday from Altenew's Halftone Happy stamp set with Catherine Pooler's Uptown ink on a piece of watercolor paper and then heat embossed with Ranger's Holographic embossing powder. I then trimmed the paper to be a little larger than the sentiment, cutting the left and right edges at an angle, and then directly added more of the Uptown ink on the edges and heat embossing again with more of the Holographic embossing powder. The larger happy sentiment was die cut out of Tonic Studio's Craft Perfect Honey Gold Mirror Cardstock with Altenew's Happy die.

To assemble the card, I glued the two larger circular frames on the white and gray panels and then glued the three-layered wreath next to them. All of the parts of the wreath and the frames that overhung the panel were trimmed at the right edge of the panel. Next, the larger sentiment was glued onto the panel, followed by the smaller sentiment strip (which had a couple of layers of scrap paper glued behind it where it needed more layers to make it have a leveled surface). Several Icy Sparkle Crystals from Studio Katia were glued next to mimic the sketch--two in the top left corner(ish) of the panel, and one below and to the right of the sentiment, which meant that it went in the bottom right third of this card due to the sentiment's size. The whole thing was then glued onto a sparkly green A2-sized card base.

We hope you are able to join us this week at the Atlantic Hearts Sketch Challenge and thanks for reading!