Hello friends! Today at Try Stampin' on Tuesday's Challenge #572 we have another sketch to share with you, with a suggested theme of harvest. So I got really into this sketch and made three cards--one for an upcoming birthday of a male relative and two to feature the optional theme. We hope that you play along with us for this challenge! 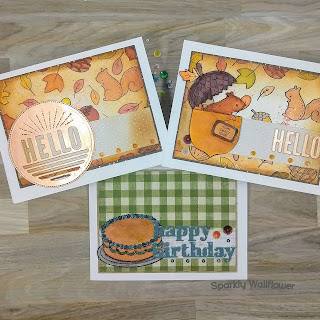 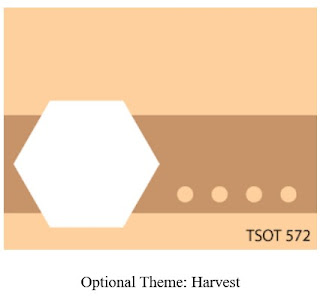 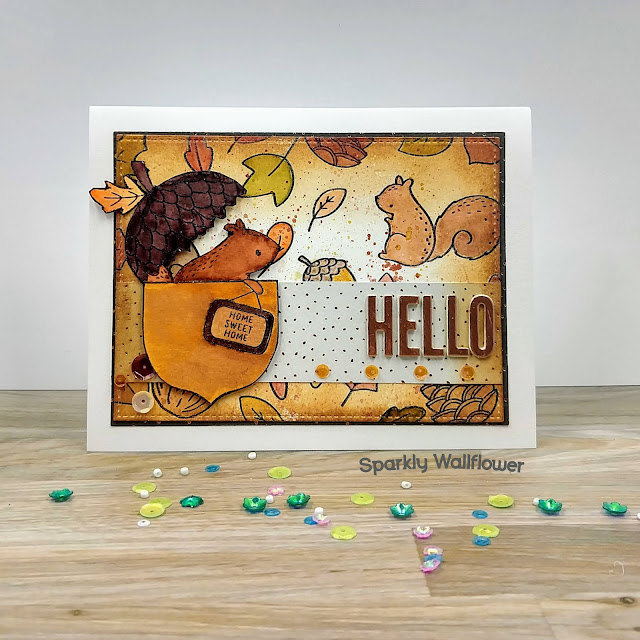 These cards started by stamping most of the stamps from Waffle Flower's Home Sweet Home stamp set over a piece of watercolor paper Nocturne VersaFine Clair ink, and in some cases stamping multiple times (especially the smaller leaves) to cover the panel. The stamped images were then heat embossed with Ranger's Frosted Crystal embossing powder. They were watercolored with a mixture of brown, olive green, red, orange and yellow Zig Clean Color Real Brush Markers mixed with water as well as gold and red watercolor from my Gansai Tambi Gem Colors watercolor set and Technique Junkies' Mindaro Shimmering Bliss spray. After the images were all watercolored, I generously splattered the panel with some of the remaining watercolors, making sure some of the shiny watercolor (the gold and red Gem Colors watercolor and Mindaro Shimmering Bliss) were included for shine. After the splatters had dried, I die cut the panel with the second-largest stitched rectangular die from Gina K Design's Master Layout 2 die set. I then ink blended Tea Dye and Vintage Photo Distress Ink around the edges--the darker Vintage Photo just around the edges and the lighter Tea Dye around more of the internal part of the card, leaving a small central part of the panel unblended. The larger, matte panel was cut out of a brown piece of patterned paper from Park Lane's Forager paper pack with the largest die from the Gina K Design's Master Layout 2 die set and the two panels were glued together. A strip of white paper with copper foiled dots from the same Park Lane Forager paper pack was trimmed with my paper trimmer to be the same length as the top panel, and then ink blended with more of the Vintage Photo Distress Ink on both edges before gluing it onto the card panel. 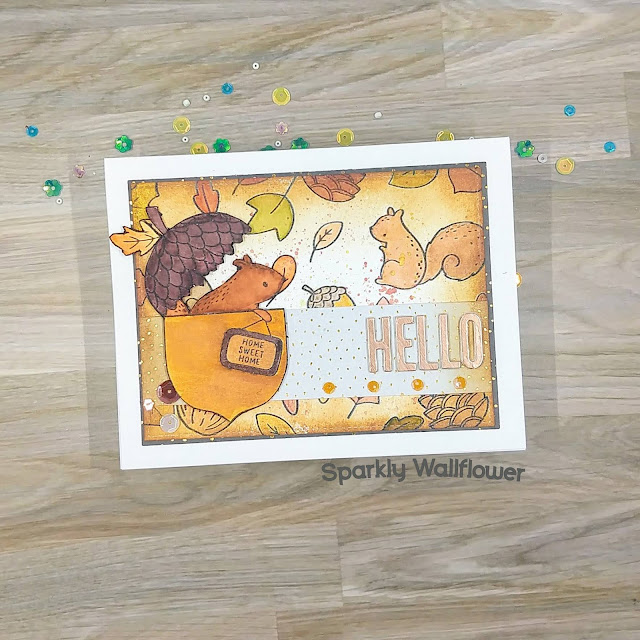 I then stamped the largest image from Waffle Flower's Home Sweet Home stamp set--a cute squirrel peeking out of their home--with more of the Nocturne VersaFine Clair ink and then heat embossed the image with Ranger's Frosted Crystal embossing powder. I then used a variety of brown Zig Clean Color Real Brush Markers to color in the acorn and squirrel and orange markers to color in the leaf. I then watercolored the squirrel and the bottom part of the acorn. Once everything dried, I fussy cut the whole image. I then glued two layers of scrap cardstock behind the squirrel and acorn for dimension. It was glued onto the lower left part of the card to replace the hexagon in the sketch. Sequins from Catherine Pooler's Kings Canyon sequin mix were then glued on the lower left of the acorn.

The sentiment was created by die cutting a piece of Rose Gold cardstock from Sizzix's Opulent Cardstock Pack with a circular die cut in my stash and then using the same die to cut two additional pieces of scrap cardstock. This die cut gives both negative and positive die cuts that are great to use on cards. I took the die cut letters and glued the three layers to give the letters dimension. They were then glued onto the left edge of the strip. I then glued 4 small brown sequins from Catherine Pooler's Kings Canyon sequin mix on the bottom part of the strip to mimic the sketch. Finally, the whole thing was glued onto a white A2-sized card base. 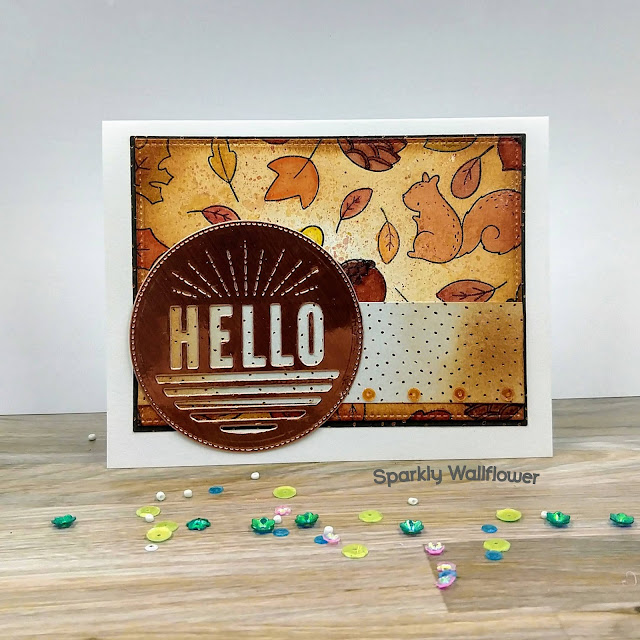 The second card was made in the same way, with the circular part of the die cut replacing the large squirrel in the first card. And since the sentiment was taken care of, I left the right side of the strip empty. 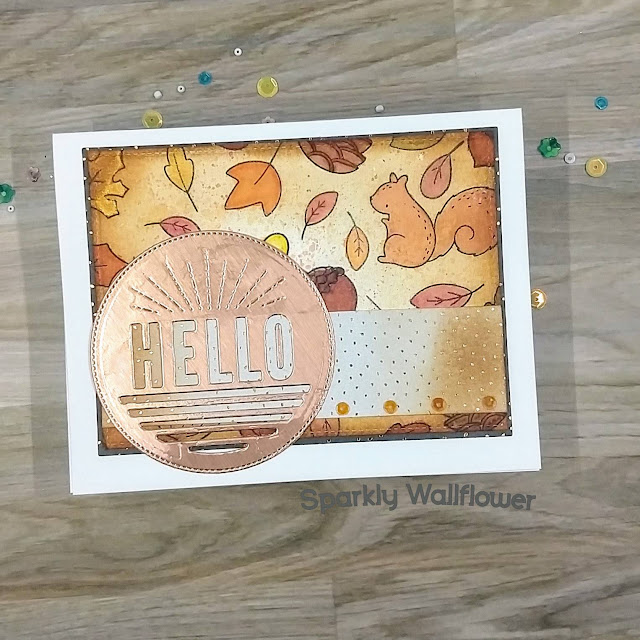 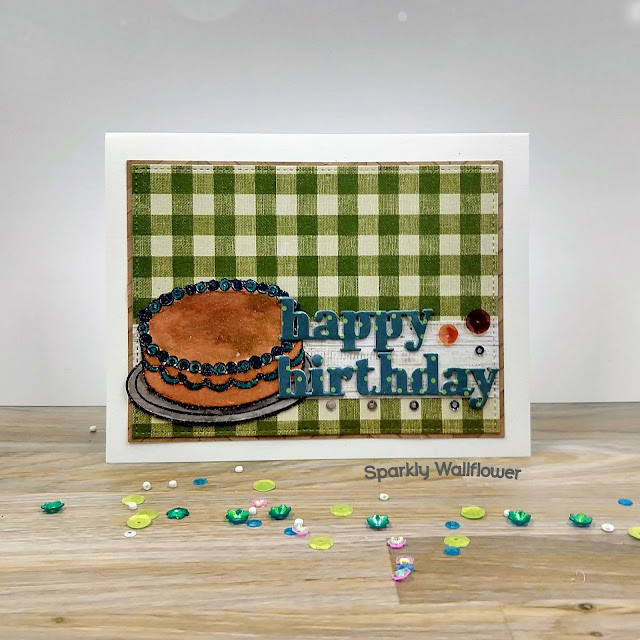 This was the first card I made for this sketch, meant to go to a male relative for his birthday this month.  For this card, I used patterned papers from Park Lane's Farmhouse Fresh paper pack. Using Gina K Design's Master Layout 2 die set, I die cut a green and white gingham piece of patterned paper with the second-largest stitched rectangle die, and a piece of brown wood grain paper with the largest die from the set. I glued a strip of white wood grain paper in my stash to the bottom third of the green and white paper before running the whole thing through my die cutting machine so that it would be trimmed and stitched along with the green and white panel. After cutting both of the panels, I glued them together.

Next came the cake. I stamped the cake from Hero Arts' Birthday Cake Stamp & Cut set with Nocturne VersaFine Clair ink and heat embossed with Ranger's  Holographic embossing powder. It was then colored with brown green and blue Zig Clean Color Real Brush Markers. I then went over the cake with gold watercolor from my Gansai Tambi Gem Colors watercolor set. After everything dried, I die cut the card but found it was off a little bit, so ended up fussy cutting around the cake. 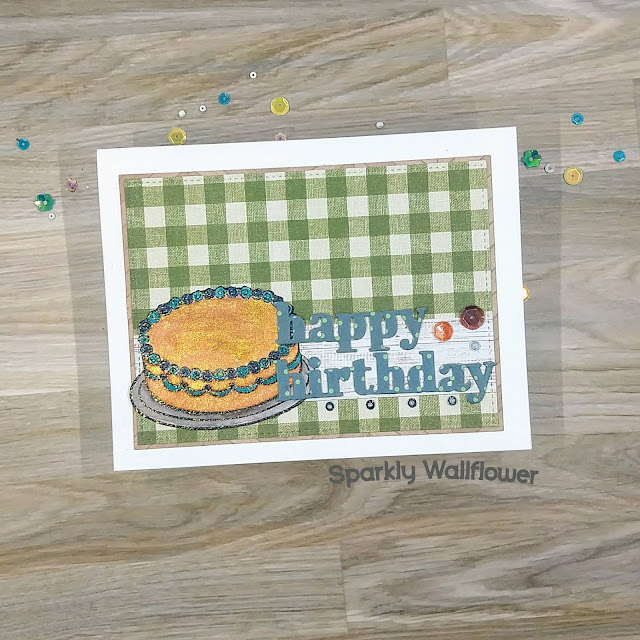 The cake was then glued onto the left side of the card over the strip to mimic the sketch. I added a sentiment over the cake--Simon Says Stamp's Happy Birthday die die cut in green polka dotted pattered paper in my stash (die cut twice and glued together for a little dimension) and then glued the sentiment onto the card. At this point I remembered the sketch called for 4 small circles on the bottom of the strip, so cheated a little and added them just below as there wasn't room on the strip. These sequins and the three sequins to the right of the sentiment again came from Catherine Pooler's Kings Canyon sequin mix. Finally, the whole thing was glued onto a white A2-sized card base.