Hello friends! Today at Try Stampin' on Tuesday's Challenge #564 we another wonderful challenge to share and hope you want to come and shine with us with this challenge. 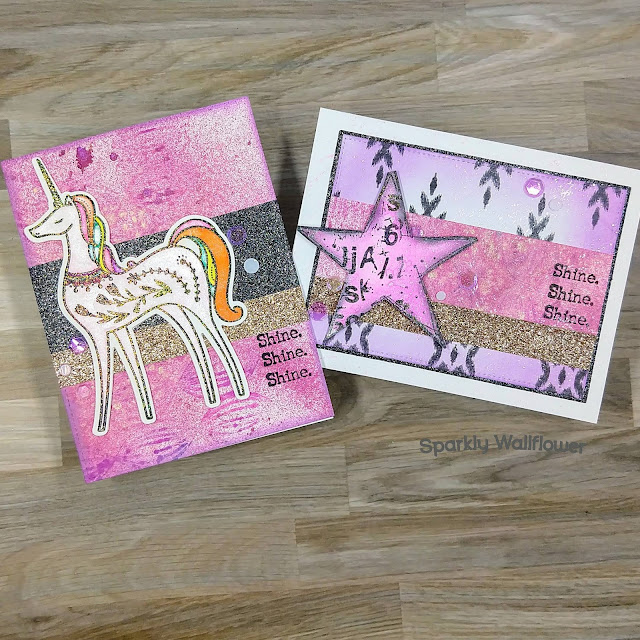 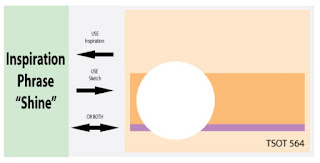 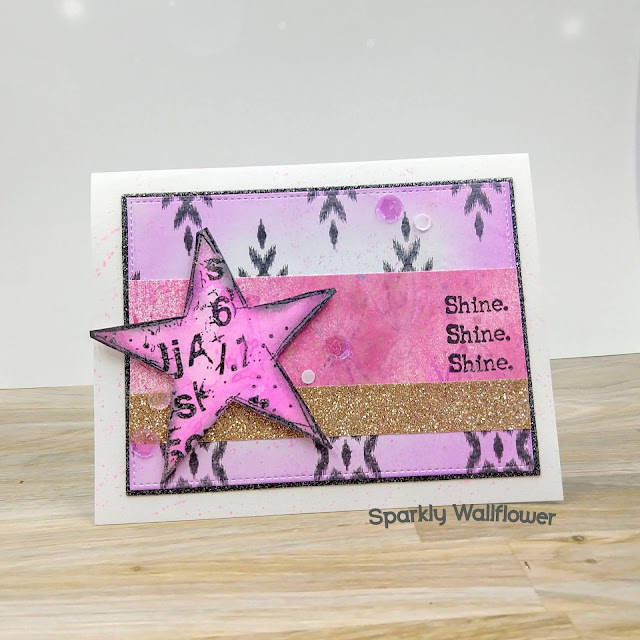 This card started with the fussy cut star from Dina Wakely's Grungy Stars stamp set, stamped with Nocturne VersaFine Clair ink and heat embossed with Ranger's Holographic embossing powder on watercolor paper. I then used some purple Zig Clean Color Real Brush Marker mixed with Technique Junkies' Iridescent Shimmering Bliss spray to watercolor smoosh the inside of the star. After the spray had dried, I fussy cut the star and then ink blended around the edges of the star with more Nocturne VersaFine Clair ink. I then set aside the star.

The background panel was created by die cutting a piece of black and white patterned paper from Prima's Painted Floral 12 x 12 paper pack with the second-largest stitched rectangle die from Gina K Design's Master Layout 2 die set and then ink blended the panel with some residual purple ink on my ink blender (mostly Wilted Violet Distress Oxide). I then glued a strip of leftover strip of a gel press print in my stash from card #2) trimmed to fit on the panel, and then covered the bottom of the strip with gold glitter washi tape trimmed to fit on the panel. The sentiment came from the same Grungy Stars set,  stamped three times on the right edge of the panel with Nocturne VersaFine Clair ink.

The matte layer was created by adding black glitter washi tape to a piece of scrap paper and then die cutting it with the largest die in the Gina K Design's Master Layout 2 die set. The two layers were then glued together and set aside to dry. 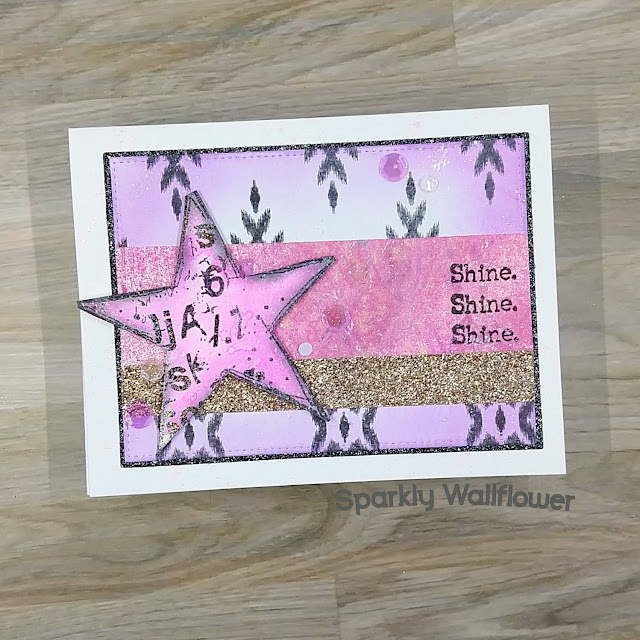 After everything had dried, I attached the star on the center left of the card to replace the circle in the sketch with Altenew's Instant Dimension Foam Tape and glued sequins from Simon Says Stamps Lilac Blooms sequin mix around the panel. The whole panel was then glued onto an A2-sized white card base. At this point I realized I had a tiny smudge on the card base, so I splattered some of the spray mixed with marker from earlier all over the card to cover it up and add a little bit of extra sparkle. 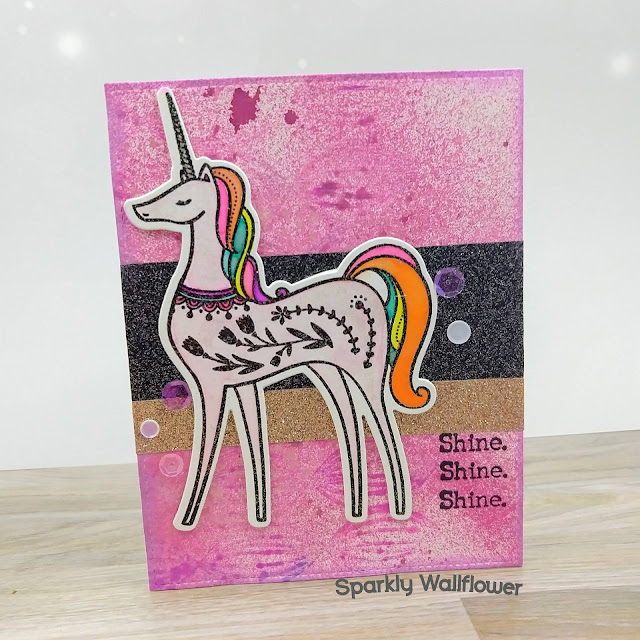 When I started prepping for these cards, I went through my stamp stash and rediscovered this stamp (as well as the Grungy Stars stamp from above) and decided that a unicorn would totally fit the "shine" parameter of this challenge.  Since she is a larger stamp, I decided to rotate the sketch to become a vertical card. So using Nocturne VersaFine Clair ink and Ranger's Holographic embossing powder, I stamped Pinkfresh Studio's Unicorn Dreams stamp set onto watercolor paper. She was then die cut with the corresponding die. I colored her in with a variety of colors of Zig Clean Color Real Brush Markers and then watercolored over her body, mane and tail with Technique Junkies' Iridescent Shimmering Bliss spray for more shine. Her horn was colored in with a Sakura Stardust Gelly Roll pen. She was set aside to dry. Later, I glued two additional die cuts of scrap cardstock behind her for more dimension.

The background paper was a gel press print I made a long time ago that has been waiting to be used. I picked it because it has some shiny gold splatters(?) on it that are really hard to see in the pictures. I used an A2-sized stitched die to die cut the panel and then ink blended around the edge of the panel with more purple ink from the same purple ink blending foam. Two strips of black glitter washi tape and one strip of gold glitter washi tape were added to the middle of the card to mimic the sketch. I then stamped the same sentiment from the Grungy Stars stamp set three more times underneath the washi tape with more of the Nocturne VersaFine Clair ink. 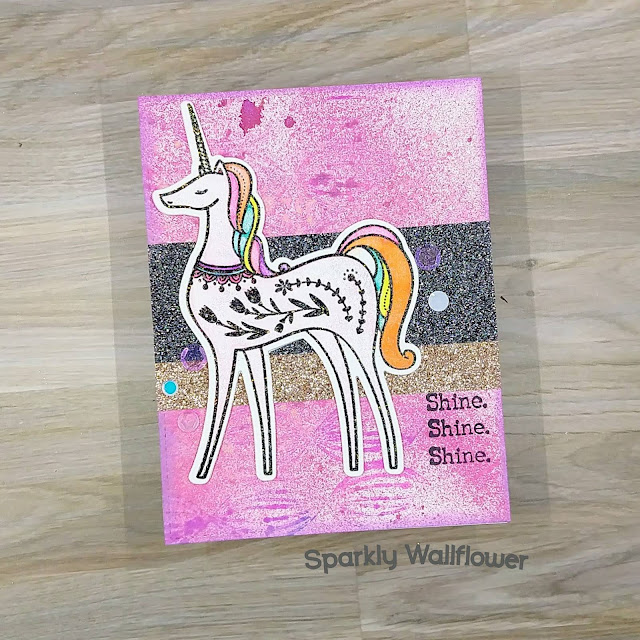 By this point, the unicorn had dried, so I glued her to the center left of the card (to replace the circle of the sketch) and then glued some sequins from Bearly Art Precision Craft Glue. Finally, the whole thing was glued onto an an A2-sized white card base.