Shopping Our Stash #471: Make Mine a TALL one

Shopping Our Stash #471: Make Mine a TALL one

Hello everyone! Today I am excited to share the Design Team cards I made for Shopping Our Stash challenge #471 with some of the new crafty goodies that I picked up from a few different smaller stamping companies while attending the Stamp and Scrapbook Expo in Washington. I felt compelled to lean into the ironic pun of the title of the challenge and focus  on using the smallest characters to create some tall cards. 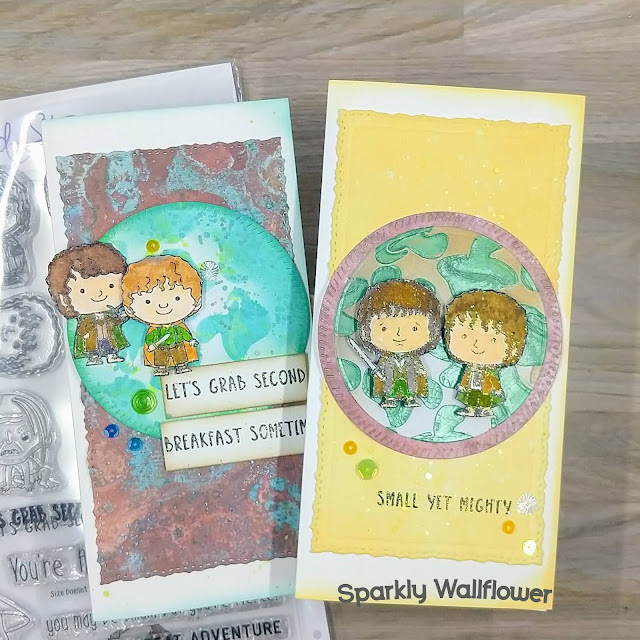 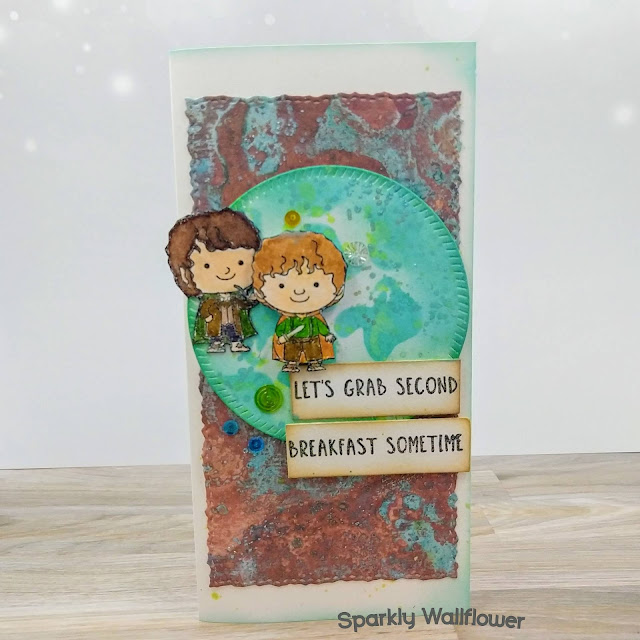 To create this card, I stamped two of the hobbits from Kindred Stamp's Size Doesn't Matter stamp set onto some watercolor paper with Nocturne VersaFine Clair ink and then heat embossing them with Ranger's Holographic embossing powder. They were colored in with my Zig Clean Color Real Brush Markers. The characters were then fussy cut and outlines of each of them were colored with a dark gray marker (because I couldn't find my black one). They were set aside.

Next, I turned to the circular background. I ink blended Salvaged Patina Distress Oxide onto some white cardstock through Sweet Sentiment Stamps' Mushroom Mandala Stencil. I then splattered some Mindaro and Vivid Volt Shimmering Bliss Spray over the stencil as well. After removing the stencil and die cutting part of the stenciled area with the smaller stitched circle from Pinkfresh Studio's Diagonal Stitched Circles die set, I decided to add a little more color by ink bending around he edge with Lucky Clover Distress Oxide on the very edge and then  Salvaged Patina Distress Oxide a litte further into the interior of the circle.I used an old splatter stamp in my stash to add more Salvaged Patina Distress Oxide (and a little residual brown ink from a past project, which I liked so kept) around the circle. Some of the splattered ink was then heat embossed with more Ranger's Holographic embossing powder. I then added two die cut scrap pieces of cardstock also cut with the same die cut behind the stenciled die cut to add some dimension and glued the layers together. This was also set aside. 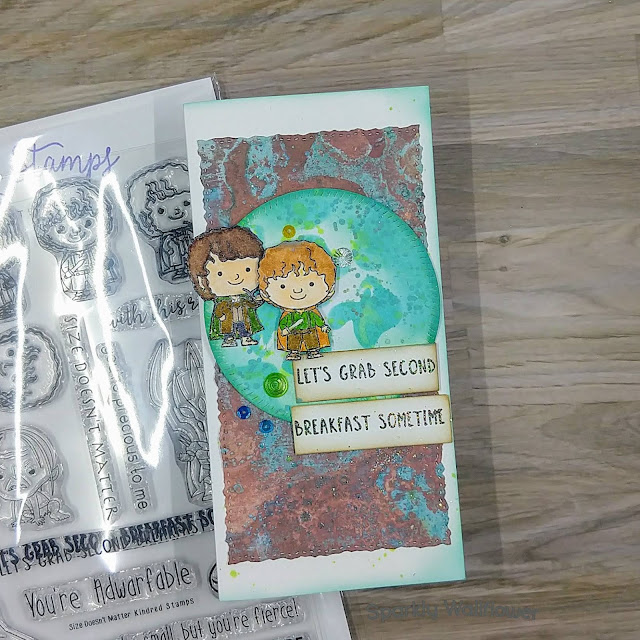 The sentiment also came from Kindred Stamp's Size Doesn't Matter stamp set stamped onto some white cardstock with more Nocturne VersaFine Clair ink and then heat embossing them with Ranger's Holographic embossing powder. The sentiment was trimmed with my paper trimmer, and then to make it fit onto the card base, was cut in two pieces. The two smaller strips were then lightly ink blended with Gathered Twigs  Distress Oxide. I glued two layers of scrap cardstock trimmed to slightly smaller than the sentiment strips behind each of the two sentiment strips for some dimension

Finally, the background panel was created by die cutting a piece of Craft Consortium's Patina Essential Craft Paper 6 x 6 pack. I have to say that I really love this paper--it is so cool and grungy is is really helping me with masculine cards! Anyway, the paper was die cut with Rubbernecker's Mini Slimline Tabbed Deckle die set. Some sparkle was added by stamping the panel with the splatter stamp a few times with more Salvaged Patina and heat embossing with more of the Holographic embossing powder.

To assemble the card, I first splattered some Vivid Volt Shimmering Bliss Spray from Technique Junkies across a white mini-slimline card. The circular die cut was glued over the background panel a little higher than the center. The hobbit on the left was glued onto the card, and the one on the right was attached with some foam squares. The sentiments were glued next. Sequins from Catherine Pooler's Blackfoot River mix were glued to the panel and circular parts of the card. The whole card panel was then glued onto the card base. I decided to add a little more color to finish the card, so ink blended around the edges with more Salvaged Patina Distress Oxide. 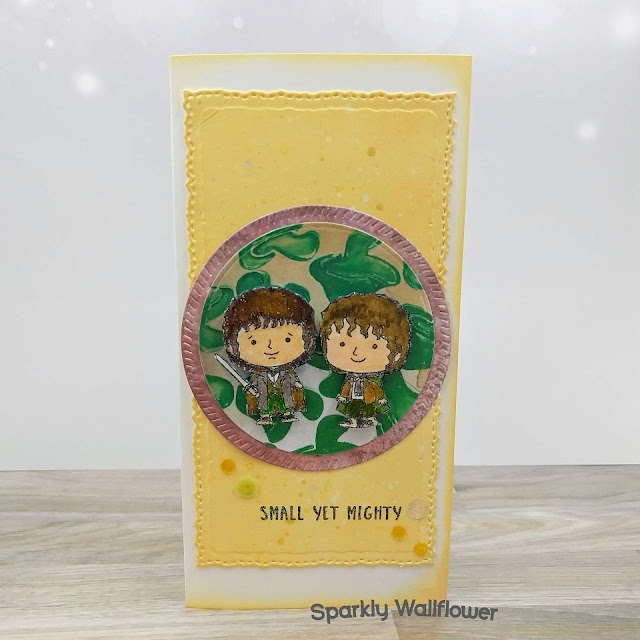 This card was a little more elaborate than the first. The hobbits were created in the same way--stamped with Nocturne VersaFine Clair ink on watercolor paper and heat embossed with Holographic embossing powder. They were then colored with Zig Clean Color Real Brush Markers and fussy cut. Before putting them aside, I did color the fussy-cut edges of each of the images with my dark gray marker.

The circular background was created by adding Chameleon Green Nuvo Crackle Mousse through Sweet Sentiment Stamps' Mushroom Mandala Stencil onto some white cardstock. I was impatient, and so used my heat tool to dry the paste. I then ink blended the background with Gathered Twigs Distress Oxide so that it was darker towards the top and lighter towards the bottom. I then used the second-largest circular die in the Pinkfresh Studio's Diagonal Stitched Circles die set (a plain circle die) to die cut the image and set it aside. I then used the largest die in the same Pinkfresh die set to cut another piece of the Craft Consortium's Patina Essential Craft Paper 6 x 6 pack. The smaller, stenciled paper was glued onto the larger stitched die cut circle and set aside to dry. 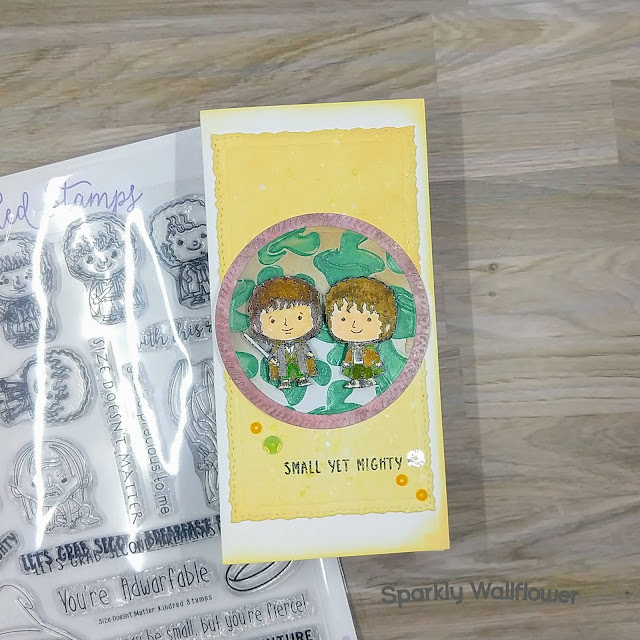 Finally, I turned to the panel. This was created by ink blending a piece of watercolor paper with Scattered Straw Distress Oxide. The sentiment (again from Kindred Stamp's Size Doesn't Matter set) was stamped directly onto this panel with more of the Nocturne VersaFine Clair ink and heat embossed with Holographic embossing powder. The panel was die cut with the second-largest die from Rubbernecker's Mini Slimline Tabbed Deckle die set. I splattered Technique Junkies' Iridescent and Mindaro Shimmering Bliss over the card base.

To assemble the card, the hobbits were attached to the circular background with foam squares, and then the circular die cuts were glued to the yellow panel. The whole panel was glued onto a white mini-slimline card base. Yellow, light green and clear sequins from Catherine Pooler's Blackfoot River sequin mix were glued onto the card panel. I decided to add just a little more color to the card by ink blending more of the Scattered Straw Distress Oxide along the right, top and bottom edges of the card base.

We hope that you are able to join us for our challenge over at Shopping Our Stash and thanks for reading!

Summer Treats! Today's card was created for a few different challenges: Make the Cards Challenge #21 (for the first card), Retro Rubber Challenge #161 and Simon Says Stamp's Wednesday Challenge (red, white and blue). Today's card features the Sweet Friends stamp and die set from Lawn Fawn as well as my Zig Clean Color Real Brush Markers   and Gina K's Master Layout 2 die set.  To create the card, I stamped the froyo 3 times, the s'more twice and the strawberries (they are stamped in groups of 3) twice on a piece of white cardstock with VersaFine Clair Ink in Twilight ,  heat embossed them with Holographic embossing powder from Ranger, and die cut them with their cooresponding die cuts. I then colored them with my Zig Markers with the froyos exclusively in red, white and blue while the s'mores were a variety of browns. Next, I stamped a sentiment from the same Sweet Friends set in Twilight ink and heat embossed with more of the Holographic embossing
Read more

A Red, White, and Blue Flower and Striped Card

A Red, White, and Blue Flower and Striped Card Hello friends! Today I wanted to share a card that I made with a few challenges in mind: Simon Says Stamp's Monday challenge (red, white and blue), The Flower Challenge #58 (adding spots or stripes), the Paper Players Challenge #548 to create an encouragement card and the Color Hues Challenge #21 (also red and blue). The card started with a watercolor cardstock panel I cut with the largest rectangular die from Gina K's Master Layout 2 die set. I ink blended some Mermaid Lagoon Distress Oxide with a few different stencils (Scrapbook.com's Mixed Stripes , and Tim Holtz's Dot Fade Stencil and Tinsel Stencil ) and used some Wow! Embossing Glitter Platinum Sparkle . I also found out that you can use water to temporarily adhere embossing powder to a piece of paper from this wonderful video from Gerry's Craft Room and added some random splatters of water and painted a border around the panel with water and used more of
Read more