Hello friends! Craft Roulette is a weekly craft game show where the hostess (Mary Gunn) and a guest create a project based on 4 randomly selected parameters. Today I wanted to share a card inspired by Craft Roulette #95's parameters:

Colors: Muted + a pop of bright 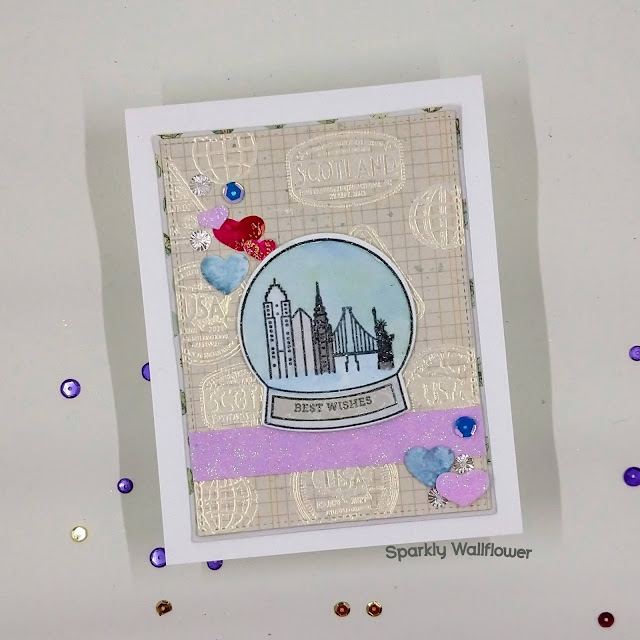 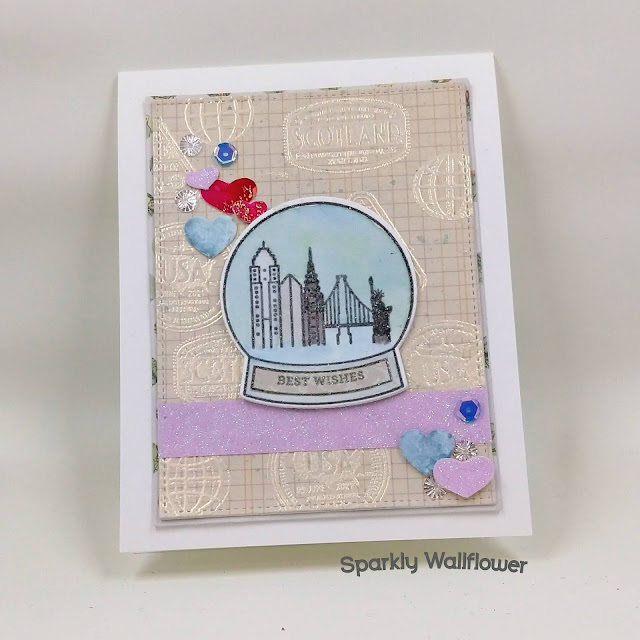 After rummaging around in my craft room, I decided to start the card with the background to incorporate the postcard element by stamping a variety of the passport stamps from the  Around the World Passport stamp set from Spellbinders all over a piece of graph patterned paper that was part of a travel pack of paper in my stash. They were stamped with Frost VersaMark Dazzle ink and heat embossed with Ranger's Vintage Pearl embossing powder (for the subtle colors parameter). Then I die cut the paper with the second-largest stitched rectangle die from Gina K's Master Layout 2 die set along with two pieces of scrap cardstock and glued all three layers together for dimension. I then used a second piece of patterned paper from the same travel pack (this time a white background paper with repeated images of globes) as my matte layer and die cut it with the largest die from the same Master Layout 2 die set. Again, I die cut an additional two pieces of scrap cardstock and glued the three layers together for dimension. The matte and stamped top panel were glued together and set aside.

Next, the New York City skyline in the snow globe came next. Mama Elephant came out with two complementary stamp sets that were used to make this scene: the Snow Globe Bitties (which has the snow globe and a bunch of super cute holiday/winter images) and a companion set called Snow Globe Scenes (that features additional scenes that you can stamp inside the snow globe, including this skyline). Both were stamped with Morning Mist VersaFine Clair ink and heat embossed with Ranger's Holographic embossing powder on watercolor paper. The buildings and the base of the snow globe were colored in with  Zig Clean Color Real Brush Markers and the blue in the snow globe was colored with Catherine Pooler's Stone Blue ink with a hint of Seafoam mixed in with water to make a very light blue/green watercolor. The sentiment was stamped onto a light gray map piece of patterned paper from the same travel set and was again stamped with Morning Mist  and heat embossed with Holographic embossing powder. The sentiment was then fussy cut and glued onto the base of the snow globe. To finish creating the snow globe, I die cut it out using the Snow Globe Bitties Creative Cuts die set from Mama Elephant as well as 2 additional pieces of scrap cardstock and glued them together for dimension as well.

To assemble the card,  I punched out a few hearts with the Ek Tools’ Confetti Hearts punch-- plain watercolor paper, previously alcohol inked Yupo paper (in a bright red/pink color for that pop of bright color parameter) and some scrap paper that I had covered with a lilac glitter washi tape. I ink smooshed some of the remaining Catherine Pooler  multiple times onto the watercolor paper hearts and dried them with my heat tool in between each pass to help build up color and so they could match the colors found in the snow globe. Once I was satisfied, I moved onto placement. The snow globe was then glued to the card panel. More of the Stone Blue ink mixed with water from earlier was splattered across the card panel. I ran a piece of the same lilac glitter washi tape across the top panel as shown above for the horizontal line parameter and trimmed the edges. Then I glued most of the hearts  as well as sequins from the Catherine Pooler Blackfoot River sequin mix. A couple of the hearts --the bottom lilac and red Yupo--were attached with Altenew's Instant Dimension Foam Tape for some dimension. To finish, the card was glued onto another A2-sized card base.

Summer Treats! Today's card was created for a few different challenges: Make the Cards Challenge #21 (for the first card), Retro Rubber Challenge #161 and Simon Says Stamp's Wednesday Challenge (red, white and blue). Today's card features the Sweet Friends stamp and die set from Lawn Fawn as well as my Zig Clean Color Real Brush Markers   and Gina K's Master Layout 2 die set.  To create the card, I stamped the froyo 3 times, the s'more twice and the strawberries (they are stamped in groups of 3) twice on a piece of white cardstock with VersaFine Clair Ink in Twilight ,  heat embossed them with Holographic embossing powder from Ranger, and die cut them with their cooresponding die cuts. I then colored them with my Zig Markers with the froyos exclusively in red, white and blue while the s'mores were a variety of browns. Next, I stamped a sentiment from the same Sweet Friends set in Twilight ink and heat embossed with more of the Holographic embossing
Read more

A Red, White, and Blue Flower and Striped Card

A Red, White, and Blue Flower and Striped Card Hello friends! Today I wanted to share a card that I made with a few challenges in mind: Simon Says Stamp's Monday challenge (red, white and blue), The Flower Challenge #58 (adding spots or stripes), the Paper Players Challenge #548 to create an encouragement card and the Color Hues Challenge #21 (also red and blue). The card started with a watercolor cardstock panel I cut with the largest rectangular die from Gina K's Master Layout 2 die set. I ink blended some Mermaid Lagoon Distress Oxide with a few different stencils (Scrapbook.com's Mixed Stripes , and Tim Holtz's Dot Fade Stencil and Tinsel Stencil ) and used some Wow! Embossing Glitter Platinum Sparkle . I also found out that you can use water to temporarily adhere embossing powder to a piece of paper from this wonderful video from Gerry's Craft Room and added some random splatters of water and painted a border around the panel with water and used more of
Read more 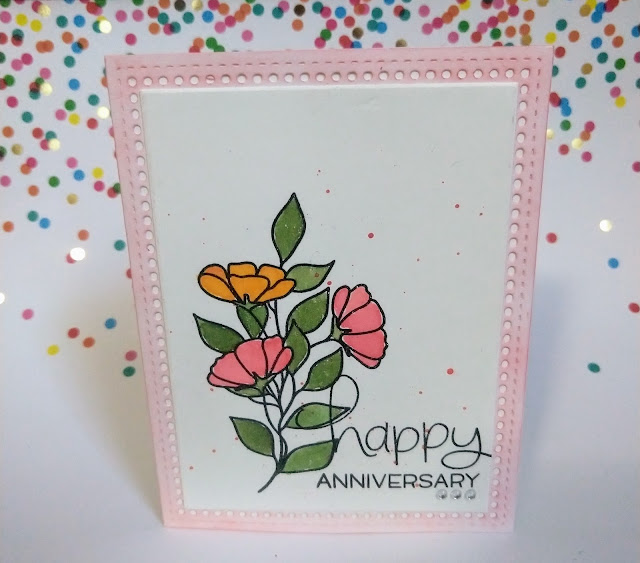 Anniversary Card Hello friends! My parent's anniversary is coming up at the end of the month, and I thought that the parameters for the Flower Challenge #57 ,  CAS (Clean and Simple) on Friday Challenge #207 (flowers), and CAS Colours & Sketches Challenge #424 . The trickiest part of this card was blending some of my Altenew Watercolor Brush Markers to mimic the colors needed for the challenge. I ended up blending a couple of colors together to get the results that I wanted (sea forest and sweet leaf for the olive green, mango smoothie and fresh lemon for the mango melody, and cotton candy and rubellite for pink).  I started the card by die cutting a piece of watercolor paper with the largest rectangular die from Gina K's  Master Layouts 2 die set . I stamped one of the larger floral images from Simon Says Stamps Stronger Together stamp set with VersaFine Clair Ink in Nocturne and heat embossed it with Holographic Embossing Powder from Ranger. Next, I watercolored th
Read more