Hello all! Today I am excited to share the cards that I made for the Altenew December Challenge (where we get to pick one of the inspiration images from the past year) to make a card based on the January 2021 inspiration photo. I loved the color combination of red/dark pink, light pink and brown since I got some pretty cool new items from Altenew that I thought would work well for this color scheme. And since the theme over at Modsquad Challenge this week is What's new? (and can include showing off some of our new crafty presents from the holidays), I thought I would enter it over there as well. Finally, this set of cards was a part of the the "homework" for my level 1 certification for Altenew's Educator Certification Program (AECP) focusing on the Celebration: Stencil Techniques class so I wanted to show you how I made three backgrounds (two that were used for today's cards, and one in reserve for later). 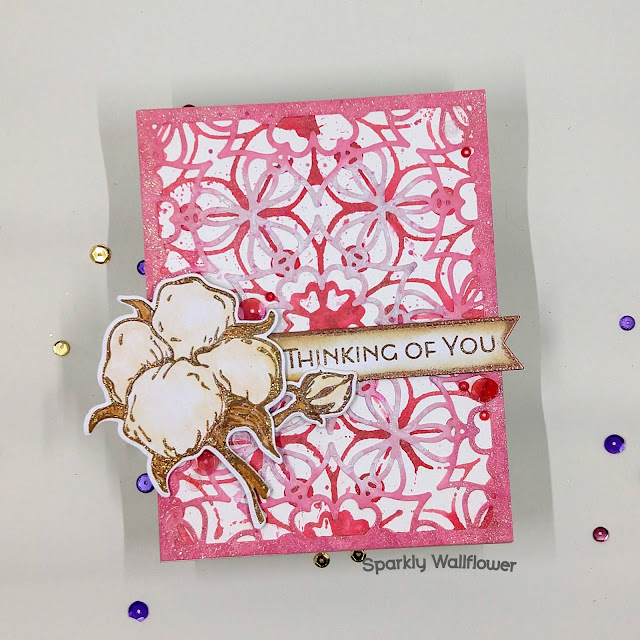 As stated above, I was able to make multiple cards and panels with one stencil--this card features a base panel where I pressed the "extra" spray that was left over on the Medallion Cover Die B die cut stencil I had made with some cardstock. After spraying a piece of watercolor paper through the stencil, I then placed the stencil wet side down onto a piece of watercolor paper and gently pressed with my hands and then left it to dry. I was left with the stencil pattern on the watercolor paper, which I trimmed with a larger rectangular die in my stash. Next, I die cut a piece of patterned pink paper in my stash with the Medallion Cover Die A die and then sprayed the pink paper with some of Altenew's Iridescent Shimmer Ink Spray and let it dry. At this point, I realized that I needed to cover up a small blemish on the right side of that die cut, so I ink blended around the edges of the panel with Worn Lipstick Distress Oxide and then heat embossed with Ranger's Holographic embossing powder for more sparkle. I then glued the two layers (the red and white panel with the stenciled pattern from Medallion Cover Die B as well as the die cut Medallion A) together and set them aside to dry.

Next, I turned my attention to the Cotton Comfort stamp and die set. I stamped all 4 of the cotton images (two larger cotton bolls and two buds as I wasn't sure what images were going to go on the card) with Gathered Twigs Distress Oxide and then heat embossed them with more of the Holographic embossing powder. I then colored the images with my Zig markers--beige on the stems and vanilla on the cotton bolls themselves. I went over the edges of each cotton boll to darken each (and leave a lighter circle in the middle of each boll on the larger cotton images). I then die cut all 4 images. Then I stamped the sentiment from the same stamp set with more of the Gathered Twigs Distress Oxide and heat embossed with Holographic embossing powder again. I then die cut the sentiment with a stitched flag die and then ink blended around the edges of the flag with more of the Gathered Twigs Distress Oxide and heat embossing with copper embossing powder.

To assemble the card,  die cut an additional two layers of all of the 4 cotton images, the sentiment flag, and the large rectangular die (the one used to cut out the stenciled Medallion Cover Die B) from scrap cardstock. I then glued the additional layers of cardstock behind their corresponding die cuts so that the sentiment strip, the large rectangular die and the 4 cotton images were now backed by two additional layers of paper for dimension. I then splattered some gem red and gem pink watercolor (from my Gansai Tambi Gem Colors watercolor set) across the card panel. After everything had dried, I glued the sentiment to the background panel after determining that I could then have the large cotton boll be placed next to it. A combination of glue and some Altenew Instant Dimension foam tape was used to attach the smallest bud right under the sentiment. Then more Instant Dimension foam tape was placed behind the center part of the cotton boll and glue was added to the right part of the boll that would be placed over the sentiment strip.  (The leftmost third was going to be hanging off the card so I left this part without adhesive.) To finish the card, I glued some red and clear sequins across the panel and glued the whole thing onto an A2-sized kraft cardbase. 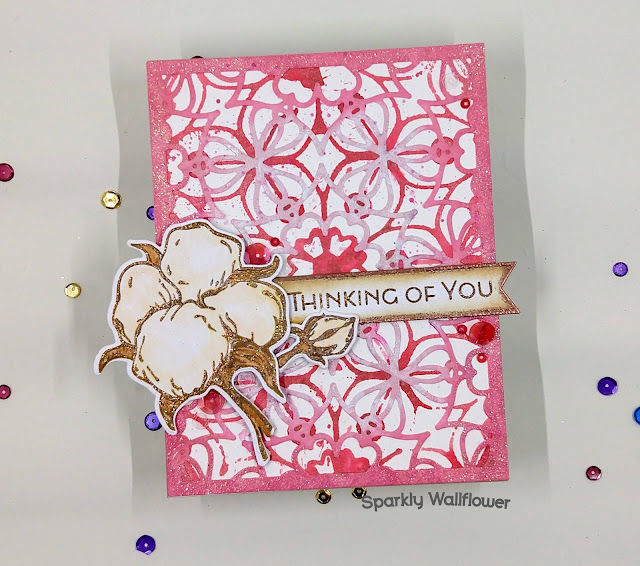 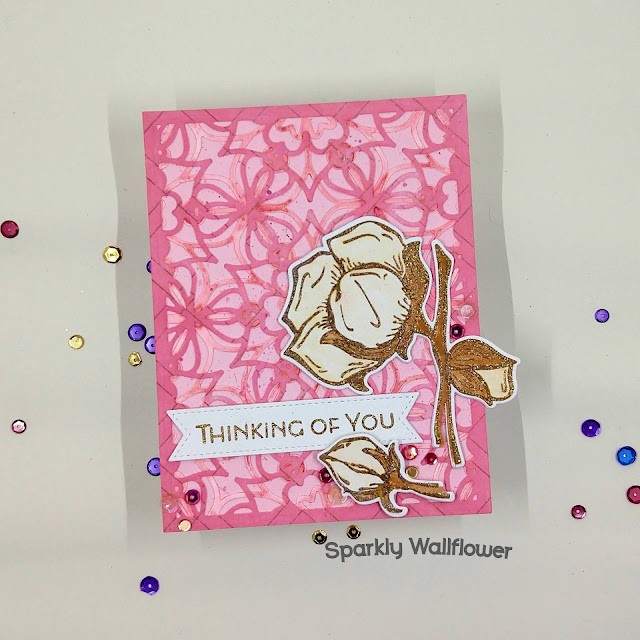 Since most of the parts of the card were already done before I started this card, it was a quick and easy to make this second one! The Layered Medallion B die cut was the stencil used to make the card panels for the other two cards, originally cut out of cardstock and sprayed with some red ink. Most of the red color was transferred to the first card's base panel, leaving this stencil a light pink. I then die cut a piece of pink patterned paper with the Layered Medallion A die and then ink blended over the whole thing with more Worn Lipstick Distress Oxide. The sentiment was again stamped with more of the Gathered Twigs Distress Oxide and heat embossed with Holographic embossing powder. This time after cutting out the sentiment with the same stitched flag die, I decided to not ink blend anymore and leave it alone. I die cut two additional flags with scrap cardstock and glued the three layers together for dimension.

To assemble the card, I glued the two Layered Medallion die cuts together and then glued them to a light pink A2-sized cardbase in my stash. Next, I glued the sentiment on the bottom left of the card and the largest cotton image next to it. I again used a combination of glue and Instant Dimension foam tape to adhere the large bud to the cardbase--the bottom two-thirds with foam tape, and the top third with glue where it overlapped with the sentiment strip. Finally, I glued some clear, iridescent and red sequins in my stash over the card. 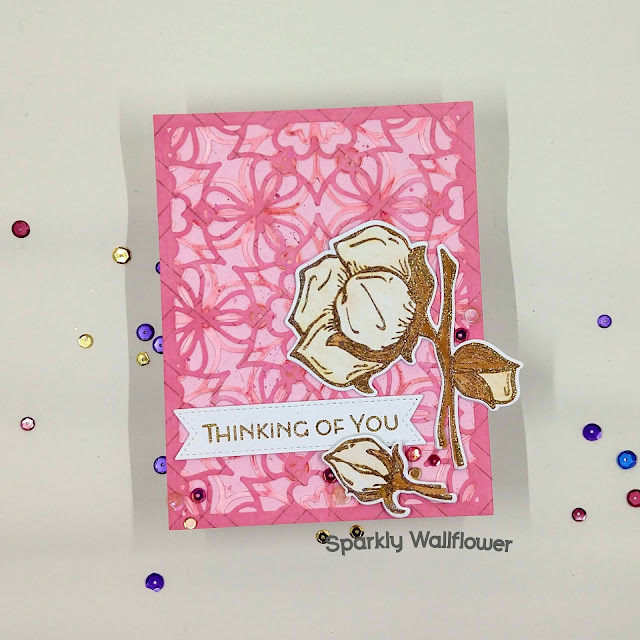 And the best part, I still have a 3rd panel that I can use on a future project! Thanks for reading!