Hello friends! I hope you had a wonderful weekend. Today we have a new sketch over at the Atlantic Hearts Sketch Challenge Blog and hope that you can join us this week. I had so much fun with this sketch that I made two cards. Usually when I do that and ask hubby and the kids which one they like better, there usually a clear winner. This week there was a hot debate. So I ask you--which do you like better? 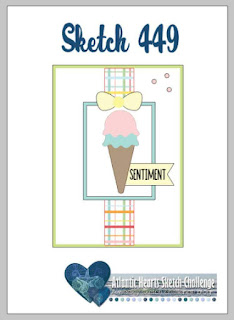 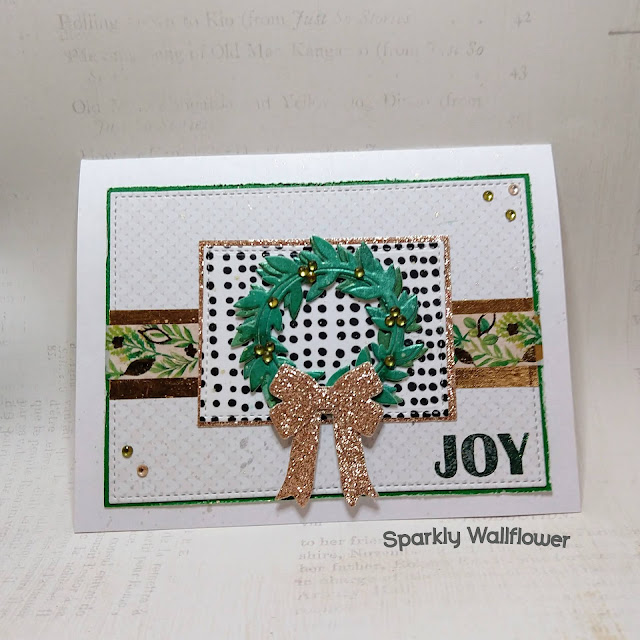 I started by creating the wreath. I sprayed a piece of watercolor paper with water and then sprinkled Nuvo Shimmer Powder in Green Parade and a little Atlantis Burst and then sprayed more water to help the color move around. After the paper dried, I cut out three wreaths with the Honey Bee Stamps' Joy Noel Wreath and then glued them together making sure that I can see all three layers. I then laid out some gold sparkly washi tape over a piece of scrap paper and die cut it with two layers of the bow--one for the base layer (the whole bow), and the second for just the top loopy part and glued them together. After the glue dried on the wreath and the bow, I glued them together and added olive gem stickers from Honey Bee Stamps onto the wreath and set it aside.

Next, I turned to the small box in the middle of the card. I attached washi tape to two different pieces of scrap paper: one piece of the Many Dots Washi tape from Altenew and a few pieces of the same sparkly gold washi tape for the bow around what would be the edge of another piece of scrap paper. I then cut them with the two smaller rectangle dies from Gina K's Master Layout 7 die set. The two layers were glued together and set aside.

Then I started working on the background panel. Using the two largest rectangle dies from Gina K's Master Layout 2 set, I cut out a piece of dark green patterned paper and a very light gray and white piece of patterned paper. I added two pieces of washi tape as seen in the picture--a wide piece of gold washi tape with a gold and green piece over it. I distressed the dark green paper with my Tim Holtz's Paper Distresser and then glued the two layers of paper together and set them aside. 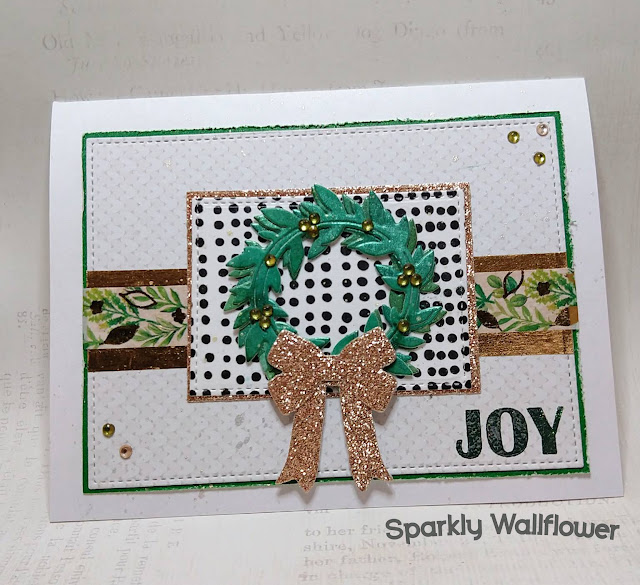 After everything had dried, I started to assemble the card. My original intention was to follow the sketch to the letter (except having the bow on the bottom) but decided that I liked it better as a landscape. I stamped the sentiment on the bottom right part of the panel with Rain Forest VersaFine Clair and then heat embossed it with Holographic embossing powder. The smaller rectangle and wreath were attached with liquid glue. To finish the card, I glued the panel to an A2-sized card base, added the gems to the corners of the card, and splattered gold watercolor from my Gansai Tambi set all over the whole thing. 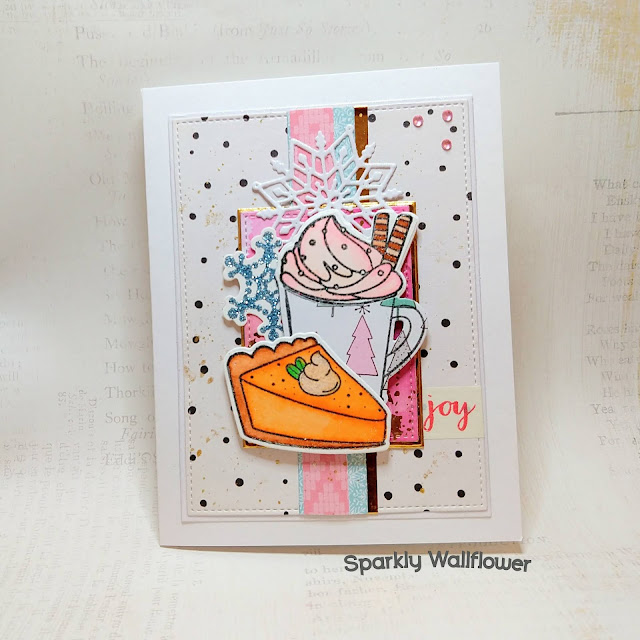 This second card was made in a similar fashion--I started out by stamping the hot chocolate and pie on smooth white cardstock with Morning Mist VersaFine Clair and heat embossing it with Holographic embossing powder. I stamped and heat embossed the cup on some patterned paper. After die cutting both versions of the hot chocolate and the pie with the corresponding dies, I trimmed the patterned paper cup and then glued it over the white paper cup. I then used my Zig markers to color in the whipped cream/chocolate straws in the cup and the pie. I added a little sparkle to the whipped cram on the pie with my Clear Glitter Gelly Roll pen and then set them aside.

I then turned to the background. I cut the smaller rectangles first--the top layer was cut with a pink and gold foil piece of paper from the Rainbow Inks patterned paper pad, and the matte gold layer behind was created with the wide gold washi tape (seen in the previous card) that was placed on a piece of scrap paper. Both layers were cut with the same smaller rectangular dies from the Gina K's Master Layout 7 die set. They were then glued together and set aside to dry. The background panel came next--the top layer came from my stash of patterned paper and the base layer is a piece of Simon Says Stamp's White Glitter cardstock. Both were die cut with the largest two die cuts from Gina K's Master Layout 2 die set, glued together, and set aside to dry.

I decided at this point to substitute the bow for a small snowflake. I die cut the same white glitter cardstock used for the base layer of the panel and die cut it with the Mini Mandala Snowflake die from Simon Says Stamp. 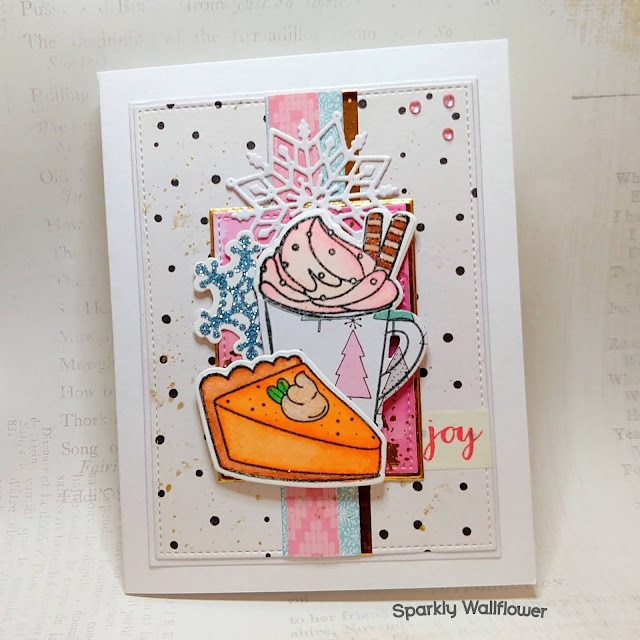 To assemble the card, I glued the bottom part of the snowflake to the top of the smaller (pink) rectangle, and then added the cup and pie with Altenew's Instant Dimension foam tape. At this point, I decided that it needed something a little extra, so I tucked a blue snowflake die cut in my stash on the left after cutting it in half. I then ran more of the gold washi tape vertically over the white background panel and then glued two strips of patterned paper in my stash over it. Then the pink rectangle was glued next (and the the rest of the snowflake was glued to the top of the white card panel). I tucked a washi tape sentiment behind the pink and gold rectangle. Next came the pink gems in the top right corner to mimic the sketch. Gold watercolor was splattered over the card panel and finally the whole thing was glued to a white A2-sized card base.

So what do you think? Which card do you like better? Let me know in the comments.