Hello friends! Over at the Atlantic Hearts Sketch Challenge, we have a fun sketch (#444) for you! I had a lot of fun making this card and using things in my stash and I hope that you play along! 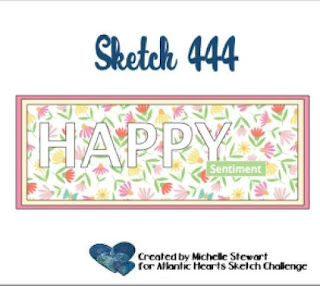 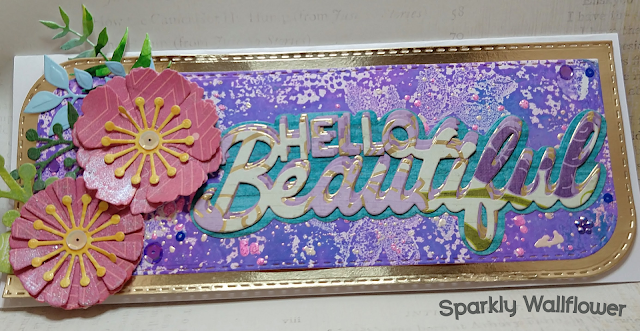 This card gave me an opportunity to use some items in my stash (leftovers from previous cards or items that I thought would be great but were just waiting for this card). I love cards like this as they are so quick, but make me happy that these items found their perfect place. This was definitely the case for the purple and blue gel press print that I had made this summer that had been patiently waiting for me to use it! I felt that this sketch would be a great way to showcase the appear as it is really a focal point rather than the background of the sketch. I also was also so happy that the pink flowers were able to find their place here as well.

I started by diecutting the gold paper (Wizard paper from Brutus Monroe) and the gel press paper with the two slimline panel dies from the Pink & Main die set. I then splattered the gel press print with water and heat embossing Cactus Flower embossing powder where it stuck to the water and then repeating the process with some Vintage Pearl powder. Next, I die cut some blue wood pattern paper with the shadow layer of the sentiment from the Pink & Main set and then die cut the actual sentiment with some purple and white floral patterned paper 3 times and glued them together in such a way that you can see each of the layers peeking out above and to the right of the layer below. The sentiment was glued to the blue shadow layer and then the whole thing was glued to the gel press background layer. 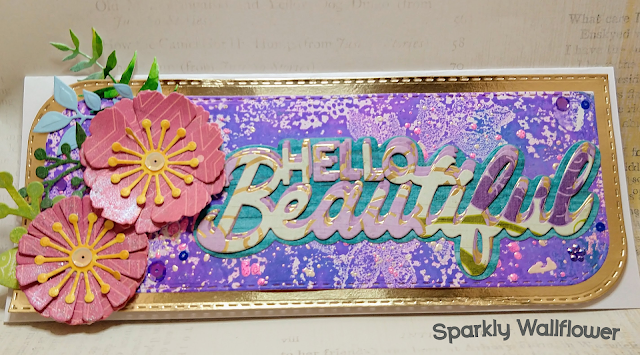 Next, I pulled out the two flowers. They had been made previously by spraying Festive Flamingo Shimmering Bliss Spray over multiple layers of flowers cut out with the Mix and Match Flowers die set from Sizzix. Multiple layers were glued together to make sure that they overlapped and gave dimension. As I best recall, the center sequins were from the Catherine Pooler Scranton sequin mix. These two flowers were matched with some die cuts from the Garden Greens die set that had been cut in a variety of green and blue papers with one piece of green and blue colored Yupo paper. The flowers with their corresponding greens were glued to the card base. After everything dried, I glued the whole thing to the larger gold colored paper. Foam tape was used to attach the gold paper to a white slimline-sized card base.  To finish off the card, I added some purple and dark blue sequins from Catherine Pooler's Maui sequin mix.