Craft Roulette is a weekly live YouTube crafting event! During most weeks, hostess Mary Gunn and a guest crafter make a card using 4 randomly-selected parameters and encourage us to play along. This week was a special episode as we were treated to three guest crafters and Mary was able to watch them with the rest of us. Episode 73's parameters were:

I have recently re-discovered Sizzix's Thinlits Mix and Match Flowers die set and decided to use that again tonight for the flowers. I also decided to combine this card's parameters with the Make the Cards Challenge #27 and Try Stampin' On Tuesday Challenge #517. 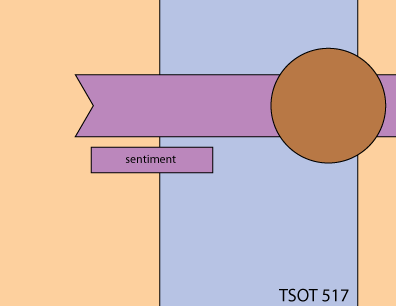 To start, I looked through some things on my messy desk (or my mesk). Right now I am crafting on my kitchen table, and sadly, the crafty part of the table has taken over! This will be changing soon as the plumbing project is almost done that is making my crafty space in our basement off limits. This worked well for the card--I had a background panel that I had made previoulsy with my gel press and then had added some Gina K Glitz Glitter Gel in Iridescent  over a stencil AND the yellow, pink and transparent white paper strips were also on my messy table/mesk. I also was able to pull out a leftover sentiment that was next to the mesk. 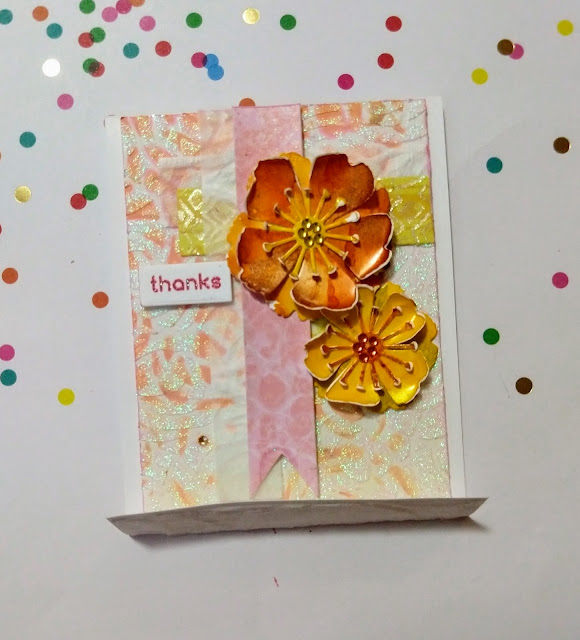 As I said above, I decided to use the colors for the challenge, which I see as a dark orange, light orange, yellow and pink. I pulled out some Yupo paper and and alcohol inks to make some of the paper for the flowers. After the paper dried, I die cut a couple of the large five-petaled flowers in orange, and the smaller five-petaled flower die in yellow. I also die cut the center of each flower--once in yellow and once in orange. I then used my heat tool to melt the edges of the centers and one of each size of petals (the layer I was planning on having on the top) to help curl the edges to add dimension. I then glued all of the layers together and then added some gems from Honey Bee Stamps in the center of each flower. 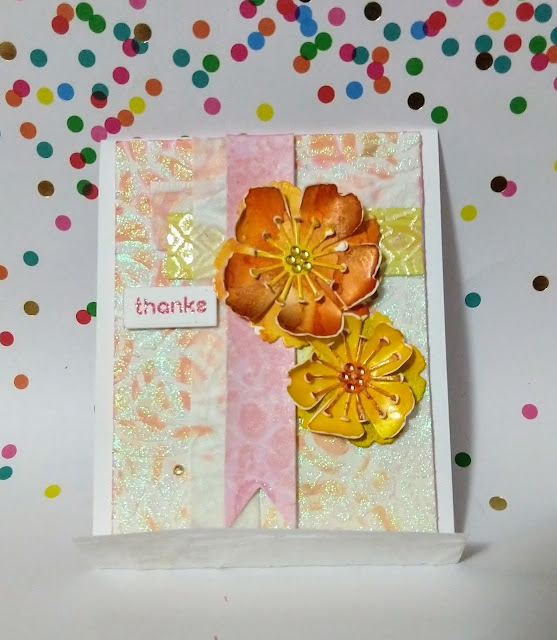 To assemble the card, I glued the yellow horizontal strip onto the background panel. I then glued a piece of the opaque handmade(?) white paper vertically. I trimmed the pink paper strip to make it look like a fish tail and then adhered it to the background with some foam tape. I then glued the yellow flower to the card base and then added the orange flower with liquid glue (where it is placed over the pink strip of paper) and foam tape (where it is placed over the card panel). Then I added the sentiment (which is from the Simon Says Stamps Just Because Word Mix 2) with more foam tape. I directly added some Kitsch Flamingo Distress Oxide around the border of the panel. Finally I added the card base to a white matchbox card base with some foam tape.