Hello friends! I have recently been enjoying die cutting alcohol inked Yupo paper into flowers and then melting those flowers to cult the petals as well as using patterned paper so I decided to feature both on this card which features the colors of  this week's Global Design Project (#301) parameters--navy, light green and pink. 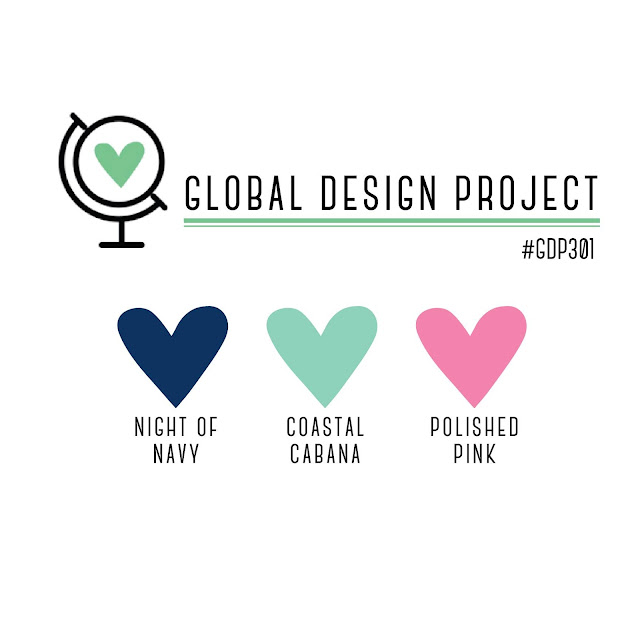 One of my crafty goals this year was to use up some of the paper in my stash, and this card allowed me to work on this goal. I ended up using three pieces of pink paper (some left over pink print from my gel press, a piece of patterned paper in a pad I had bought a long time ago, and a little bit of pink alcohol-inked Yupo paper) as well as some navy shiny paper and some light green patterned paper. I was able to make the pink and green paper a little shinier with some Dazzle Shimmering Bliss Topper spray from Technique Junkies and adding a little ink. I think the card looks really pretty, and my stash is a little smaller. Take that crafty goal!

To create the card, I pulled out Honey Bee Stamp's Hydrangea Honey Cut set (a die cut set). There are multiple layers of flowers--I cut the lower two layers with the darker pink paper left over from a gel press project and the two top layers plus a few individual flowers with the light pink patterned paper. I also die cut the leaf multiple times with the light green patterned paper. I also die cut the individual flowers again with the alcohol-inked Yupo paper. I then sprayed all of the paper (other than the Yupo paper) with the Dazzle Shimmering Bliss spray and left them to dry. 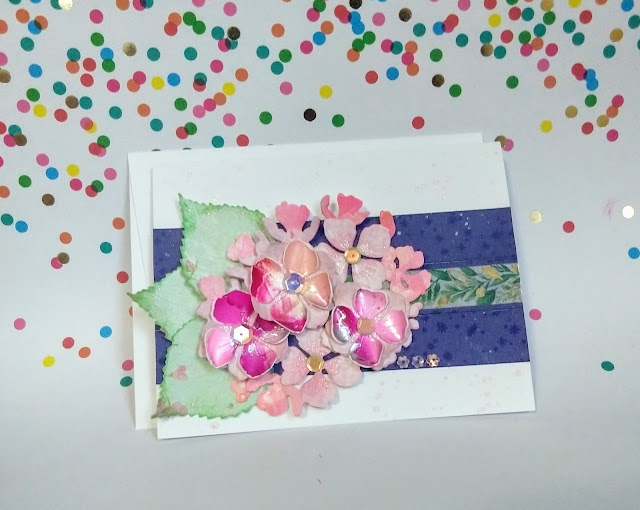 While they were drying, I melted the edges of the Yupo paper flowers so they curl up and then set them aside to dry. I also pulled out the Simon Says Stamp Strips 2 die set and cut the remainder of the shiny navy paper (I had originally had planned on only using one strip, but then changed my mind) and grabbed the leaf washi tape.

Next, I put the hydrangea together. I glued the 4 layers of multiple flowers together and then ink blended the center of each of the flowers in the current top layer with some Worn Lipstick Distress Oxide Then I glued on the individual flowers made with the pink patterned paper  and finally the alcohol inked yup paper individual flowers. I added some light pink and white sequins from Catherine Pooler's Scranton sequin mix to the center of each flower and then set the flowers aside to dry. 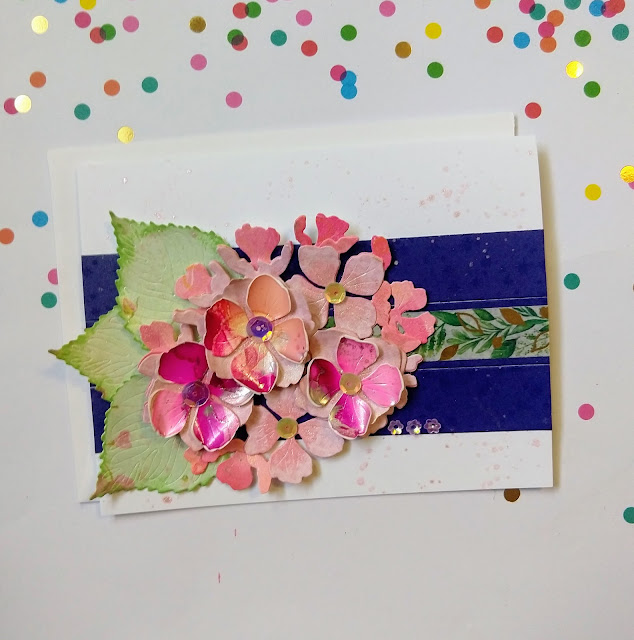 Then I turned to the leaves. The two top leaves seen in the card were doubled up so that these leaves had a little more dimension and strength. I added some Applemint ink from Gina K directly to the edges of all three leaves. The leaves were glued to the back of the floral cluster.

To assemble the card. I added some of the leafy washi tape to one of the navy blue strips and then glued all three strips to the center of a white A2-sized card base. The edges were trimmed on the border of the card. Then I glued the floral cluster to the card. Finally, I added some pink floral sequins from Catherine Pooler's Summer City sequin mix in a line next to the flowers. Finally, I mixed a little of the Worn Lipstick Distress Oxide with some Liquid Stardust from Lawn Fawn and a little water on a piece of acetate and then splattered this on the card for a little more color and shine. (Because you can never have enough sparkle!)