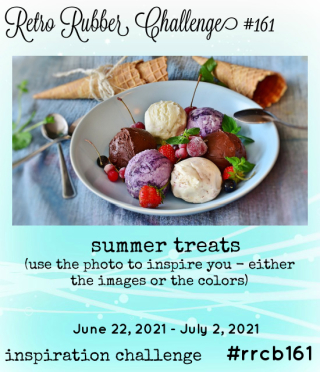 To create the card, I stamped the froyo 3 times, the s'more twice and the strawberries (they are stamped in groups of 3) twice on a piece of white cardstock with VersaFine Clair Ink in Twilight,  heat embossed them with Holographic embossing powder from Ranger, and die cut them with their cooresponding die cuts. I then colored them with my Zig Markers with the froyos exclusively in red, white and blue while the s'mores were a variety of browns. 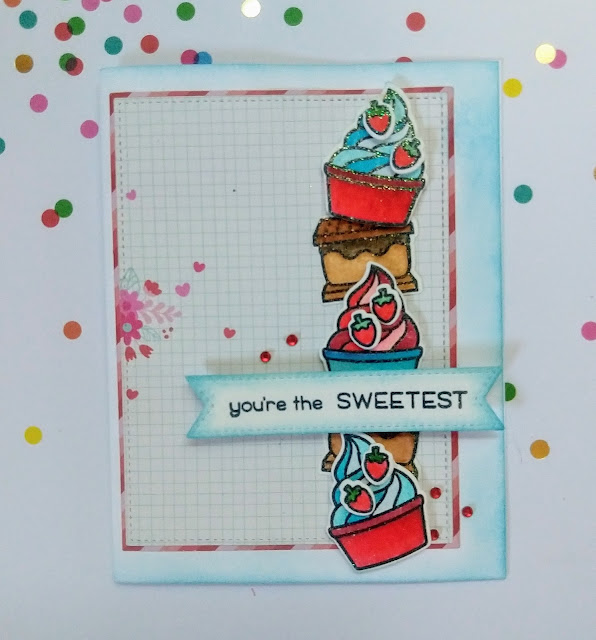 Next, I stamped a sentiment from the same Sweet Friends set in Twilight ink and heat embossed with more of the Holographic embossing powder. I die cut the sentiment and two pieces of scrap cardstock using one of the stitched flag dies from the Gina K Master Layout 2 set, and then glued all three layers together and put them aside to dry.

Then I pulled a few pieces of patterned paper out of my stash.The front panel is a light blue grid pattern with flowers and hearts, and the matte behind that is a diagonally-striped red pattern. I cut both with the two largest rectangular dies from the Gina K Master Layout 2 die set and glued them together and onto a white card base with some liquid glue. 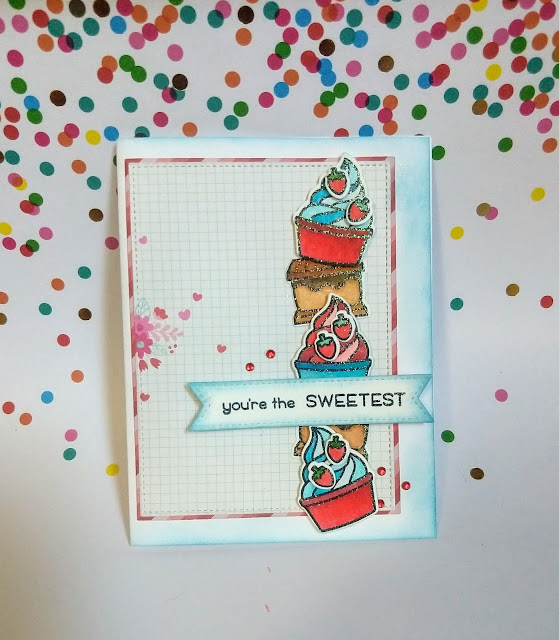 To assemble the card, I glued the two s'mores to the blue and white panel with liquid glue, making sure that they were a little wonky. Next, I added some foam tape behind all three of the froyos and added them to the card--the two with the blue froyo and red cups on the top and bottom, and the red froyo and blue cup in the middle. Again, I tried to make them a little wonky, so some of them were tilted to the right and some were tilted to the left. I then added foam tape to the vast majority of the strawberries and placed them on the froyo. (To make the middle froyo work out, one of the strawberries had to be glued to the froyo.) I then added a LOT of foam tape behind the sentiment--there is a base layer of foam tape behind the whole sentiment strip, but on the outer right edge, and basically the whole left half of the strip, there are two layers. Right before I actually attached the sentiment, I decided to add some blue ink blending around the edge. Basically I just applied the residual blue ink from my blue ink blending onto the sentiment strip and then attached it to the card. At this point, I decided that more ink blending was in order, so I ink blended again with the same residual blue around the edges of the card base. Finally, I added some red gems from Honey Bee Stamps.