I wanted to share three cards that I made with Local King Rubber Stamps' Riding the Wave die and stamp set. This set is so fun--I love turtles, and this stamp set features two! This is a red rubber stamp set, and made to ink up the whole image (rather than an outline) so I decided to color all three images with my  Zig Clean Color Real Brush Markers. My Misti was crucial for this project so I could color a little bit of the stamped image at a time, stamp with the Misti and then repeat, adding layers of color and sometimes even adding some watercolor along the way.

Card #1: I decided to start by stamping onto a piece of patterned paper. I had a piece of paper with some light blue grid lines that I stamped the turtles onto. I decided that after I had finished coloring the turtles that the grid lines were a little too harsh, so I went back and colored the surrounding area with some blue watercolor and then added some gold splatters with my  Gansi Tambi Starry Colors watercolor set. I finished up the card by adding some gems from Honey Bee Stamps and then glued the whole thing to a white card base. 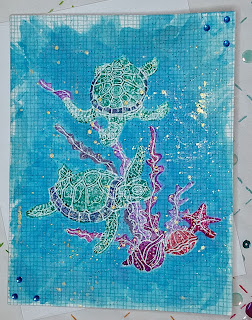 Card #2: The second card was created with a piece of white card stock that I had ink smooshed in blue a while back. I used a similar process as the card above by coloring directly onto the inked image. I went over the seaweed with some gold watercolor from the Gansai Tambi watercolor set by painting directly onto the stamp set and then inking the paper with the water colored stamp. To add a little texture, I then diecut the colored panel using the Simon Says Stamp Detail Swirls wafer die. I like that it looks a little like waves. Finally, I added some gems from Honey Bee Stamp and glued the whole thing to a white card base. 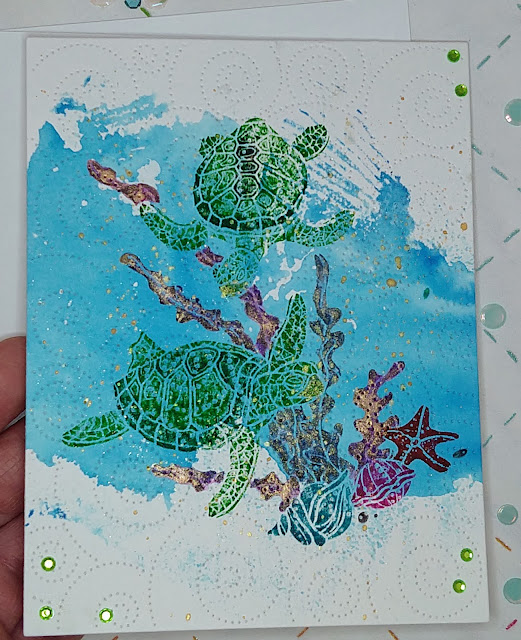 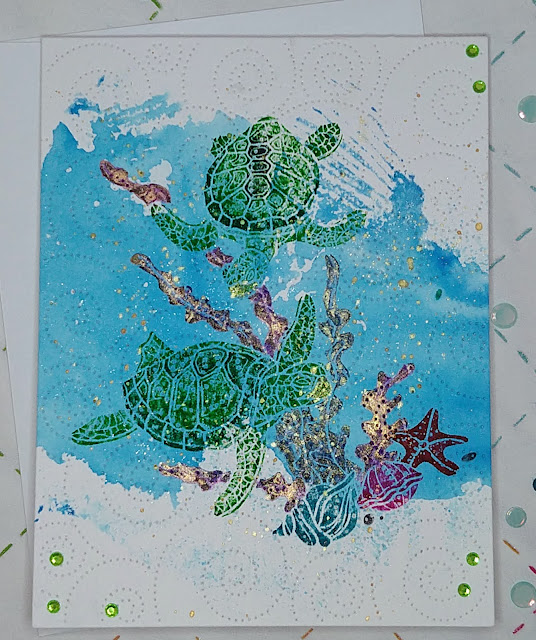 Card #3: After coloring the image, I used the matching die cut. There are two die cuts in the set so you have more options for die cutting the image! I loved how this die cut also made perforations in places (like one of the turtle's necks) to give you the option of folding the image for more dimension or other options. Super clever. Anyway-after I die cut the image, I decided the card base needed some pizzaz so I ink blended on the card base using the Simon Says Stamp Boho Circle stencil. I added some foam tape behind the turtles and added them to the card. I then grabbed a leftover sentiment from Simon Says Stamp's Just Because Word Mix 2 die and stamp set. Finally, I added some gems from Honey Bee Stamps. 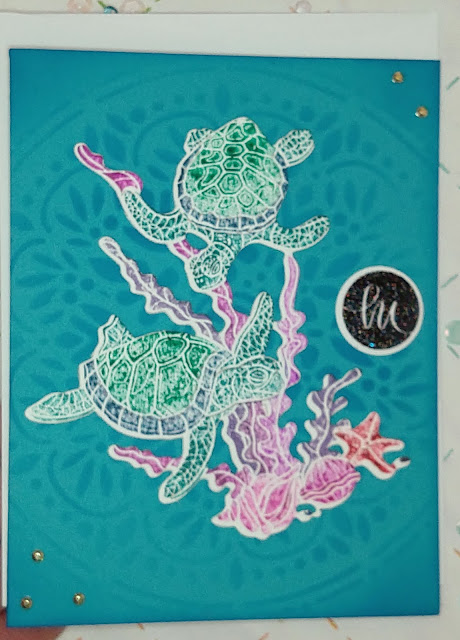