I have made 4 cards using Altenew's Goldfish Pond stamp and die set and used some of my stash of papers at the same time. I had colored the fish and and plants a few weeks ago when I wasn't at home and was able to make the cards with the colored images. I had stamped a few copies of the fish and other images on some watercolor paper using VersaFine Clair Nocturne. For about half of the images, I then heat embossed the images using Holographic embossing power from Ranger (from Collage, a local craft store in Portland). I colored the images with Zig Clean Color Brush Markers and then painted over some of the fish with some of the gold watercolors in the Starry set from Gansai Tambi.

Card #1: This card was created using a background panel in my stash. After gluing the fish, rocks and plants, I decided that I wanted to stamp one of the sentiments and the rocks from the set directly on the panel, and was able to do so without messing up my work. (Note to self: make this decision before you put in all of the work!) I finished up the card with some gems from Catherine Pooler. I added some foam tape on the back of the panel for some dimension and then placed the whole thing on a green card base. 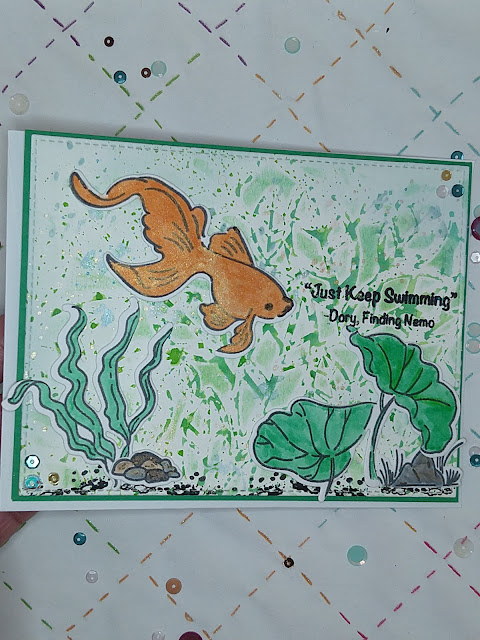 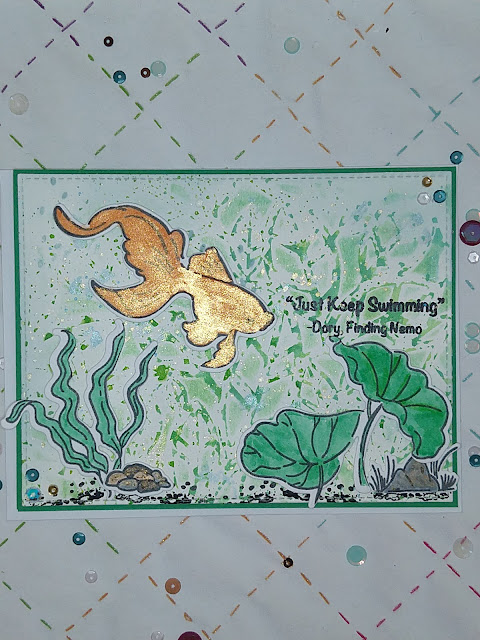 Card #2: This card was made in a similar way as the first card. I dry embossed the panel with a stencil in my stash for some texture in the background. The gems came from Honey Bee Stamps. 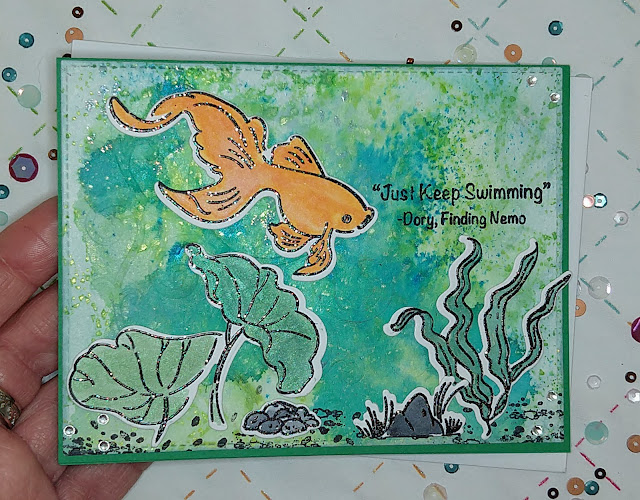 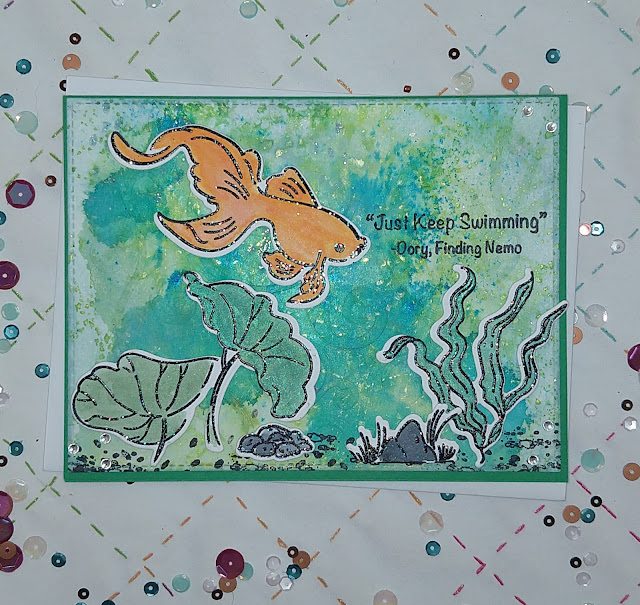 Card #3: I colored the back of a piece of Lawn Fawn Pearlescent Vellum with some blue and green Zig markers. After this dried, I cut out the vellum with the second largest Memory Box's Wrapped Circle die. I decided that this needed a little more texture, so dry embossed the vellum with Inkon3's Pondie stencil. I used some double sided tape to affix the vellum to the blue card base, and then I then placed two of the fish and a lily pad using some foam tape for dimension. I then added 3 light green gems from Honey Bee stamp towards the bottom, randomly flicked some gold and white gold watercolor paint from the Gansai Tambi Starry set. I added a sentiment from Tim Holtz's Idea-ology Sentiment Label Stickers set to finish up the card. 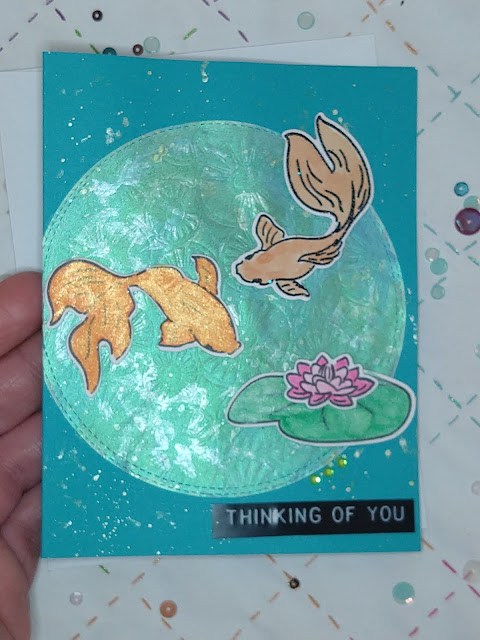 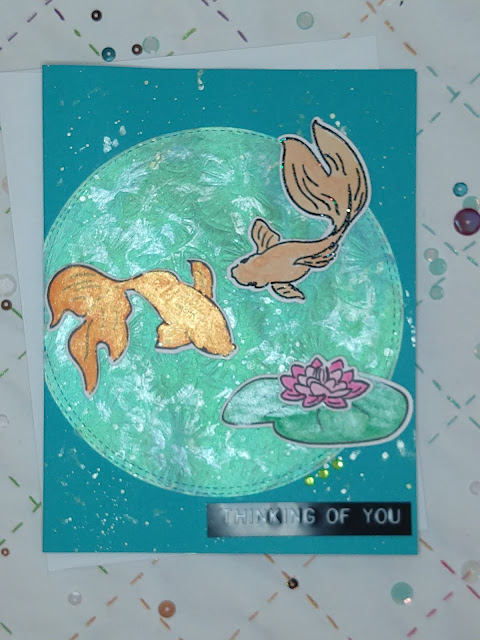 Card #4: I used another piece of patterned paper that I had made and was spending time in my stash. I used a square die cut from  the Ellen Hutson's Essential Squares set. Again the gems came from Honey Bee Stamps. 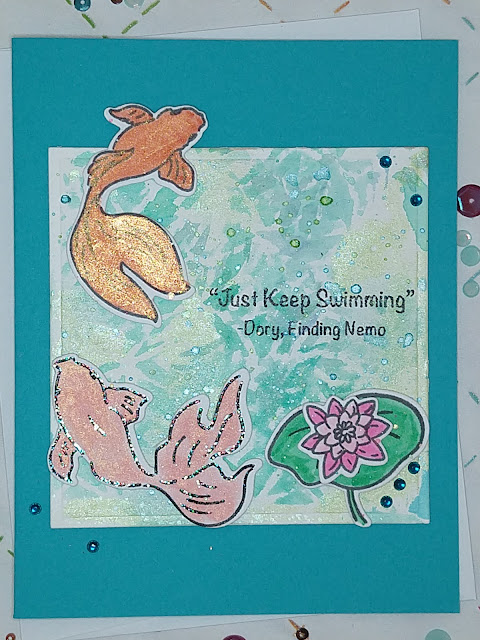 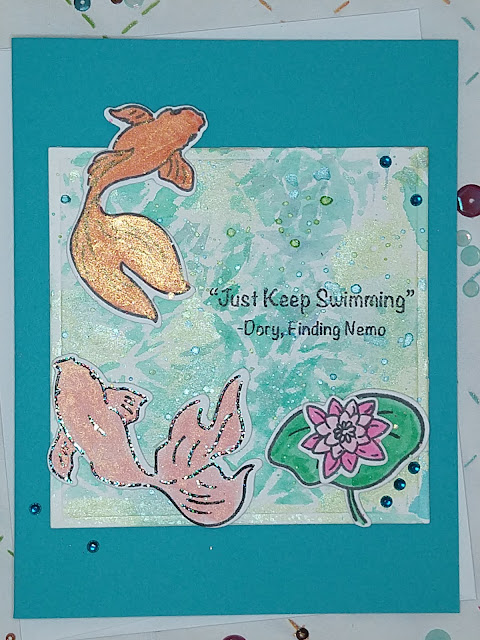 I hope you enjoyed looking at these cards as much as I enjoyed making them. Thanks for reading!