Creating my own background for the Simon Says Challenge

Simon Says Challenge:Make my own background

This week's Simon Says Stamp Wednesday Challenge was to create my own background and using products from Brutus Monroe. I am slowly buying more Brutus Monroe products, especially their really wonderful stencils.

Both of my cards that I created for this challenge used the Brutus Monroe Jourdain Stencil.

This stencil was part of my crafty Hanukkah present and I have used it on some other cards, but it was fun to use it again. I made both cards using a similar process with some spins along the way.

I started by die-cutting a piece of watercolor paper using a rectangle die cut that is the exact size of my card base. I then did some smooshing using some Distress Oxide inks. On this first card I used the following colors: Tumbled Glass, Twisted Citron and Mermaid Lagoon. I dried it using my heat tool, and then stamped the card with an older script stamp from Hero Arts using the Mermaid Lagoon ink.

I had some residue of some Gina K Glitz Glitter Gel in gold that I had placed on some other cards and so placed the glittery stencil down on the card and taped it down with washi tape. I ran it through my die cut machine to create a letter press like card and the glitz was left behind. While I like how it came out, it did tear the card base, so I would not repeat the process. I may use some embossing ink and then use some gold embossing powder to have a similar look without the tears. 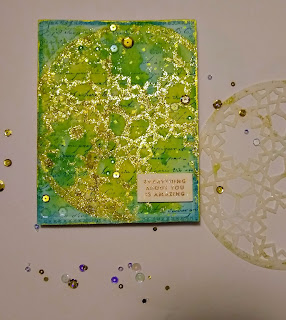 I then added some gem stickers from Honey Bee stamps and some sequins from Catherine Pooler's Vegas, Baby! collection.  I then attached a sentiment from the Simon Says Stamp Just Because Word Mix 2 stamp and die set using some Tsukineko Delicata Celestial Copper ink from and embossed with some Holographic embossing powder from Ranger.
My second card was created in a very similar way. I used some different Distress Oxide inks (Worn Lipstick, Carved Pumpkin, Dried Marigold, and Ripe Persimmon). I embossed the that colored card base using the stencil. Then I blended some of the same inks over the stencil so I could then emboss the stencil design using Wow! Embossing powder in Metalline flame. I like this color a lot since it is really pretty and iridescent! 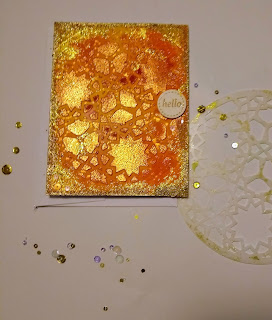 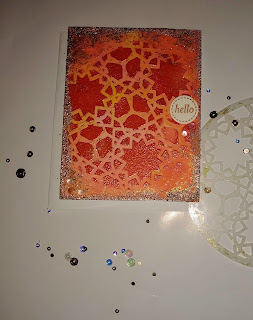 I came back after the Glitter Glitz dried and then added some Catherine Pooler Vegas, Baby! collection sequins and another sentiment from the Simon Says Stamp Just Because Word Mix 2 stamp and die set using some Tsukineko Delicata Celestial Copper ink from and embossed with some Holographic embossing powder from Ranger.